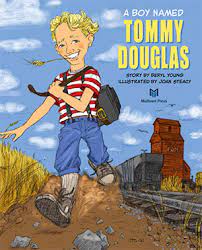 Tommy ran across the field and burst through the back door.

Blood ran down Tommy’s leg. Tears ran down his cheeks.

Today’s children are likely unaware that Canada’s universal health care system that has been so important during this Covid period has its roots in an accident suffered by a seven-year-old boy over a century ago. When young Tommy gashed his knee to the bone on a sharp rock, his parents didn’t have the money to pay for a doctor to tend to the gaping wound. Many months later, when Tommy’s leg was still causing him significant pain, his parents dipped into their savings to take him to a doctor who said that the infected wound would require Tommy’s being hospitalized. Following weeks of treatment with no improvement, the decision was made to amputate Tommy’s leg. By chance, Dr. R. H. Smith, a famous bone surgeon, encountered Tommy who was crying because of the impending loss of his leg. After looking at Tommy’s chart, Dr. Smith said that he could perform an operation that might save the leg, but Tommy’s parents had no idea how they could pay for such an operation. Dr. Smith proposed doing the operation for free if the parents would allow him to use the procedure as a teaching opportunity for his medical students, an offer that was accepted. The operation (actually three operations) was more successful than Dr. Smith had anticipated, and, though Tommy regained full use of his leg and could live a normal life, he remained aware of the reality that there were many others who could not access needed medical treatment because they could not afford it.

The sequence of childhood events described above take up about two-thirds of the book’s succinct text with the remaining portion briefly touching upon Tommy’s adult years, his becoming a Baptist preacher, then, as a politician, his bringing Medicare into being in Saskatchewan in 1962, and, finally, as the leader of the federal New Democratic Party, his seeing Medicare become a national reality in 1968. A closing “About Tommy Douglas” page adds additional biographical details about the person who has been called the “Father of Medicare”. Unfortunately, the book does not contain of photograph of the book’s subject.

A Boy Named Tommy Douglas, a well-written and illustrated biography of someone who, a hundred years after his birth, was named “The Greatest Canadian of All Time” in a national CBC television vote, merits being in all schools and public libraries.