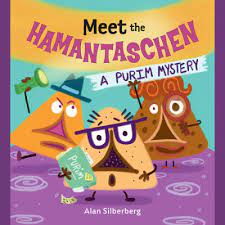 This File is Full of False Facts!

“Those clues were clueless!” the Cactus complains.

“And we still haven’t found the megillah!”

The stranger frowns. “But you DID find the Purim story, right?”

A story from the 5th century BCE is told in a modern context in Alan Silberberg’s latest humorous explanation of Jewish holidays, Meet the Hamantaschen: Detectives.

Silberberg creates a detective story to expose misinformation or false facts about the story of Purim. It’s a framework that, unfortunately, children today will understand.

Three hamantaschen detectives (hamantaschen are cookies) are tasked with exposing the truth behind the falsehoods, and, in grilling their suspects, the children (as represented by knishes, kreplach and other European Jewish foods), reveal the true story of Haman, the scheming advisor to Persian King Ahasuerus. Haman wanted to rid the kingdom of Jews, but his plans were foiled by Queen Esther (looking a lot like a rugelach) who had been hiding her religion. King Ahasuerus was furious at Haman’s lies and banished him. Since then, Jews have celebrated by dressing up like the characters in the story and swinging groggers (noisemakers) to drown out Haman’s name (like shouting “boo”) when the story is read out.

That’s the megillah, the story or the scroll, where the story of Esther is written. It’s a complicated story, and, in Silberberg’s presentation of it, a story that children who are more familiar with Yiddish and Yiddishkeit (the language and the culture) might understand better, although his ability to link elements of the story to modern issues, such as the conspiracy theory that Covid-19 vaccines are seeded with mind-controlling computer chips, is admirable:

The Cake beings the questioning.

“Isn’t it true that Vashti didn’t like the king’s kishka, so she put a computer chip in his brain so she could control him?

Why not make light of nonsense as a way to help children untangle what’s going on in the real world? Notwithstanding the Yiddish references, there are a lot of jokes any child would laugh at

“Your FOOT has a problem?”

and would subsequently be able to appreciate the cultural humour. A helpful glossary of Purim-related words at the back of the book defines unfamiliar words.

Silberberg, an American transplant to Montreal, knows how to make kids laugh. He is the winner of the Sid Fleishman Humour Award for his middle grade novel, Milo: Sticky Notes and Brain Freeze. His previous Jewish holiday books, Meet the Latkes and Meet the Matzah: A Passover Story are full of both tongue-in-cheek and ribald jokes. Silberberg has been a writer and animator for Nickelodeon and Disney.

Silberberg’s talent at illustration is shown through his expressive caricatures of Jewish delicacies, such as a pickle wearing a crown or a matzah ball sporting a moustache and beard. The deep-coloured drawings dance on the pages with enough white to relieve the eyes. The story is explained both through text and dialogue bubbles. Children will spend extra time examining the illustrations.

Huzzah for Alan Silberberg’s playful imagination and his ability to translate these gems of ideas into stories. The only fault in his explanation is that he didn’t tell young readers why hamantaschen are the traditional cookie baked for this holiday. The three-cornered-cookies represent the kind of hat Haman wore, and disdain is shown to him by biting the cookies.

Chh-appy Purim, as European Jewish grandparents would have said - not ‘ch’ as in ‘chop, though.’ Roll the sound at the back of the throat to make it authentic. Work at it - the story gets better the more you try.

Harriet Zaidman is a children’s writer living in Winnipeg, Manitoba. For an outstanding (the best!) hamantaschen recipe, check out her recipe blog, North End Nosh.