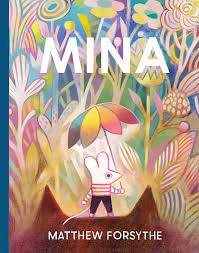 Mina lived in her own little world where nothing ever bothered her. Except for one thing.

Mina is an adorably told tale about trusting your loved ones but also trusting your own instincts. Mina is a mouse who appreciates being able to keep to herself in her sheltered world of books. Mina’s father is more extroverted and is constantly bringing home surprises for Mina, the majority of which fail to impact her private world in any meaningful way. But when Mina’s father brings home a “squirrel” (which is definitely a cat), Mina begins to worry and makes her concerns clear to her father. Mina’s father reminds her of the stick insects he once brought home and the fun they had with them, but Mina quickly reminds him that the stick insects, in fact, stole her books when they came to visit and never returned them. Mina continues to worry despite her father’s carefree attitude, but, for a while, everything continues peacefully. After a few days, Mina’s father notes that the “squirrel” hasn’t eaten anything and appears lonely. Though Mina warns him against bringing home any further surprises, Mina’s father returns with two more “squirrels” who also don’t eat, finally prompting her father to call for a doctor (also a mouse). The doctor quickly concludes that the problem “is that these squirrels are definitely cats”.

Mina’s father finally sees the danger inherent in the surprises he brought into their home, and, as he does, the “squirrels” finally start behaving like cats and chase all three mice through the woods. From the safety of a tree, Mina reminds the cats of the hospitality she and her father showed them, but the cats unrepentantly continue trying to eat them until they are suddenly interrupted by a stick insect walking “slowly into the fray”. The stick insect, equipped with a book previously taken from Mina, reads aloud in a “deep charismatic voice” until the cats fall asleep and the mice are able to sneak away to safety. As they do, Mina’s father cheekily reminds her that he told her everything would work out in the end, and Mina grudgingly admits that, this time at least, he was right.

Matthew Forsythe’s illustrations expertly mirror his narrative, displaying a colourful quirky world imposing itself on Mina’s well-ordered, sheltered one. Forsythe shows equal deference towards both Mina and her father’s habits and instincts, showing the benefits of the father’s extroverted nature and Mina’s introverted one. By bringing back the briefly mentioned book-thieving stick insect as the eventual saviour of the mice, Forsythe subtly assures readers that Mina’s worries are not always warranted and that some surprises are good. With this twist, Forsythe argues that Mina’s instincts were correct but she was also correct to trust her father, encouraging young readers to honour their own instincts but also those of their parents who may be more aware of a bigger picture.

Continuing themes found in Forsythe’s animation work for the television series Adventure Time and The Midnight Gospel, Forsythe’s work showcases an assemblage of quirky outcasts, each with their own beliefs and habits, and the rough and tumble but ultimately rewarding consequences of accepting different individuals for who they are. The mostly silent cats are quietly and humorously menacing while Mina’s father’s willingness to believe in the good in the world remains heartwarming if laughable in light of the eventual actions of the “squirrels”. Fans of The Borrowers and The Secret World of Arrietty will also delight in Mina and her father’s miniature household with its antique art (postage stamps), megaphone (tin can) and single acorn roast dinner.

Tessie Riggs, a librarian living in Toronto, Ontario, never leaves the house without a book.