Bus to the Badlands 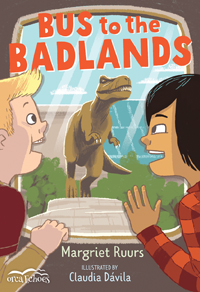 Bus to the Badlands

We ended up talking about dinosaurs all day, every day. Our librarian, Mrs. Pringle, brought us her entire collection of dinosaur books. We studied dinosaur bones in biology. We talked about prehistoric times during history. We measured and counted dinosaur bones in math. The only thing our teacher did not have us do was write dinosaur poems.

When Josh returns to school after the summer break, he admits that he has mixed feelings about the end of his vacation. He is looking forward to learning new things like going to the school library, but he knows that he will miss the freedom of just hopping on his bike and going to meet his friends whenever he chooses. Author Margriet Ruurs has created a group of relatable characters in this classroom in a small Alberta town. Because they have grown up together and have known each other since kindergarten, they have been looking forward to the annual field trip that their class gets to take. They are almost as excited as their teacher, Mrs. Cupcake, seems to be when she tells them, “This year we are heading to Drumheller!” She continues by telling them that such a special trip will require extra funds and that the school expects the students to help with the planning and fundraising. Josh’s reacting to this extra work with a wry sense of humour and practical nature makes him such an enjoyable character, especially when he notes that the kids end up buying each other’s stuff at the school garage sale.

Claudia Davila’s cheerful black and white illustrations are included throughout. In some cases, they fill a whole page, and occasionally they accent the story with a helpful half-page illustration. Davila’s ability to create a variety of expressions for Josh and his classmates is particularly noticeable on the page when they all rise early on the morning of the field trip. Josh looks embarrassed as his mother kisses him good-bye; another classmate is thrilled to be leaving for Drumheller; one boy looks like he isn’t fully awake; and two girls are dismayed to see a friend’s dog sniffing at their knapsacks. Later in the story, Davila provides valuable context by including drawings of the children visiting The Royal Tyrell Museum and taking walks through the Badlands. These illustrations add to the story and allow for a better sense of what these kids are experiencing on this extra special field trip. Without Davila’s images, it might have been difficult for some readers to fully understand what hoodoos truly looked like or to grasp the massive scope of the landscape the children are visiting.

Ruurs maintains an authentic sense of humour from the beginning of the book to the end and includes serious moments that balance the humour. The kids seem to have been lifted from a normal classroom with several of them answering “Me!” to the teacher’s question of “Who isn’t here yet?” as she looks at the class list when she stands at the front of the bus to complete her final double check. She has them play Rock, Paper, Scissors together, count license plates and sing endless songs on their trip, and, despite their having been in the same school together for years, they also learn things about their classmates that they had never known before. In the time they spend together on the bus and in the camp at Drumheller, they become closer friends and have deeper conversations. Despite Bus to the Badlands being a shorter book, the author is able to create emotional connections between the students in more than one chapter.

The trip to the museum is not a smooth one for Josh and his classmates, and they react according to their temperament. Josh takes every bump as part of the larger journey; his poor friend Angela suffers from some motion sickness on the bus ride; and Mrs. Cupcake suffers most of all when a malfunctioning hose causes their old school bus to break down on the highway and some of the children decide to antagonize the bull in a field they had been using as a resting spot. When the group makes it to the Royal Tyrell Museum, they enjoy a relaxing tour through the gallery, but their hike through the trails leads to some excitement as they find a snake, a lot of mud, and something that looks a lot like dinosaur bones. They don’t end up naming it the ‘Joshosaurus’, but the celebration of the discovery is in keeping with the rest of the book.

Every great road trip is filled with excitement, and Bus to the Badlands has more than you would expect in a visit to a dinosaur museum when you include an encounter with a bull, the possibility of being bitten by a snake and the chance that the kids might be credited with a discovery of their own. The blend of humour and learning makes this a story one that is memorable for both Josh and the reader.

Penny McGill is a library assistant in the Collections Department with the Waterloo Public Library in Waterloo, Ontario.