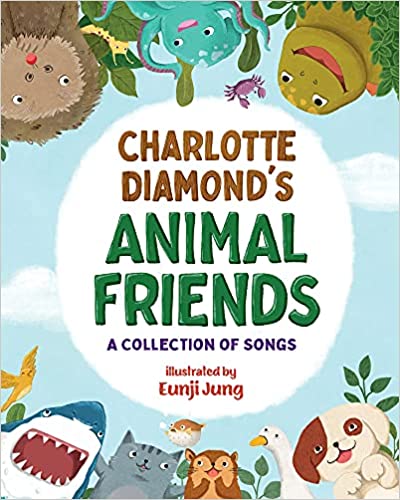 Talk to your bird, whistle a tune
She might start talking to you
Or pet your cat when she’s feeling sad
She may do the same for you.
Animals have personality, animals have lots to say
If you take time to look, take time to listen
They’re different in every way.

My dog was sick, I held him in my arms
And gave him water each day
I tried my best to keep him safe
And take the pain away.

Well, I’m an animal, you are too
We’re just like our animal friends
I care for you, you care for me
Our friendship never ends.

Charlotte Diamond’s Animal Friends is a collection of songs/poems about animals. The animals described vary from sea creatures, to land animals, insects, pets, extinct (dinosaurs), and make-believe. The poems’ titles are:

Each poem/song has its own distinct format. Many of them have a chorus stanza that appears every second stanza. Some have a rhyming couplet rhyme scheme. A few are blank verse. The author uses repetition throughout which will appeal to this age group. Words, lines, and entire stanzas are often repeated. The author also uses figurative language. Alliterations such as, Dicky, Dicky Dinosaur, Ottie the Otter, Moose on the loose, Slimy the Slug, and Splishin’ and Splashin’ are some examples. Similes are plentiful too. Croak like a frog, dabble like a duck, bark like a seal, squirt like a clam, and meow like a catfish are just a few. The author introduces some words into the poems/songs which will be new to some children and will be an opportunity to expand their vocabulary.

The illustrations are full-colour in cartoon format. They support the text, and the depictions of an actual animal are very realistic. Children will enjoy the detail in the illustrations and will be able to point out the animals or places being described in the song/poem.

The author’s songs, resources, and PRIZE (teaching method) are available at charlottediamond.com. Songs and instrumental tracks are also available on iTunes and other digital formats. Charlotte Diamond’s official YouTube channel is: youtube.com/channel/UC7s27wsTf-mTxXLtgYabmrQ

I accessed some of the author’s on-line songs that are in this book. I observed that she used puppets and other props while singing these songs, accompanied by music.

Charlotte Diamond’s Animal Friends could be used by teachers/caregivers to develop rhyme, rhythm, and other language skills. Because each poem/song is a stand-alone, this book could be used as a resource tool.