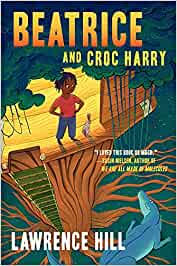 Beatrice was not entirely sure if she was dead. She raised two fingers to her lips and felt her own warm breath. She appeared to be awakening from a deep, dark dream in which she had either died or come close to it. As she opened her eyes and studied her circumstances, the facts confirmed that she was alive. She didn't know much, but she knew this: her name was indeed Beatrice. It had a certain flow. Three syllables and never just two, thank you very much.

Beatrice was lying in a single bed in a one-room, wooden cabin. She had never slept in that bed before or seen the cabin. She had no idea what awaited her outside, except an incessant woodpecker. Eight pecks in a row. Pause. Another eight pecks. And again. And again. There was nothing like a woodpecker to get her attention. It sounded like an electric hammer in the hands of a toddler. The message being banged right into the grey matter of her brain, seemed to say: I am here and you are there and if you don't get up this very second I am going to tap tap tap tap tap tap tap tap until you go completely mad.

Beatrice swung her legs off the bed. Straight ahead: three rows of shelves, stacked with books. To her left: a bedside table, and on it two more books. On top was a manual with purple handwriting on the cover. It said: Survival Tips, Argilia Forest, 2090. Beatrice turned to the first page, which consisted of a simple message in purple ink: Outhouse is outside. Climb down the ladder and head to the river. Ladder? River? Outhouse? Was this some sort of joke?

And so we are dropped into the middle of the story of Beatrice, a feisty brown girl who has many skills -- she can read well, for example -- but no knowledge of anything that has gone before other than, apparently, her name. And a vague dream of a disaster of some sort. Other facts filter gently in as she makes her way to the river, builds a fire and cooks oatmeal (two more bits of knowledge from somewhere), meets an enormous King Crocodile named Croc Harry, manages craftily to turn him from a potential predator to a friend and helper, in all of this guided, but not directed, by helpful signs and the two books left on her bedside table. The first was Survival Guide, Argilia Forest, 2090, and the second The St. Lawrence Dictionary of Only the Best Words Real and Concocted. (An example of the first category: potable, which Beatrice encountered almost immediately on a sign beside the river; of the second: bumfuzzled, which described how she felt at the moment, i.e., utterly confused and somewhat dazzled.) Oh yes, and all the animals and bugs can talk, not just Croc Harry and an annoying adorable bouncy rabbit named Horace Harrison Junior the Third.

Life in the forest is really rather pleasant: food appears as required (mostly oatmeal, but with lots of her favourite "fixings", such as raisins and cinnamon), there are books, new and familiar, on the shelf, and Beatrice can do whatever she wants, whenever she wants, without being told to do something else. However Beatrice finds existence a bit pointless, and she decides to try get out of the forest and back to the Queendom she came from. With a little bit of help from her friends, and a lot of grit, determination, and just plain smarts, she passes tests that she didn't know were tests and finds clues that were not what they seemed, but were all written in careful calligraphy in purple ink. She makes it out of the forest, with Croc Harry and Horace, both of whom had a prior connection to her in the Queendom and to the reason they had all been sent to Argilia, but why should only she have remained human?

Beatrice and Croc Harry is a splendid book! I usually don't take much notice of the fulsome praise that publishers print on the covers of new books -- quotable quotes by other authors perhaps looking for reciprocal favours -- but when someone I admire as much as I admire Susin Nielsen says basically what I feel about something, I can only echo her: "I loved this book so much"! Beatrice is a clever determined kid in an incredibly strange situation which is only gradually made somewhat clear. Flashes of memory, for example, of people screaming, of having ridden a horse, without any context or associated people, of having her hair done in corn rows but not who did it, of recognizing books and knowing what is in them, but not where she had read them, she finds disorienting, but welcome. Croc Harry and HHJ the T (Horace for short) are not the easiest of friends to have and to hold, but having achieved true friendship with them, Beatrice stays loyal to the end. She doesn't defeat the evil, ill-intentioned giant who attempts to invade her sleep while she is in Argilia, trying to take over her mind en route to conquering the Queendom, but she does manage to keep him out of her own head and promises to continue the fight. And since she is obviously slated to become the next queen of Queendom, we are sure she will attempt to do it.

I have left out several important characters who add richness to this narrative -- Fuzzy the turquoise tarantula and Killjoy the barber/dancer/dentist lemur for two. You'll just have to read the book, but you should do that anyway. It's a not-to-be-missed read.

Mary Thomas worked in school libraries in Winnipeg, Manitoba, until she retired definitively this year, and she still loves YA literature but is not given to fulsome praise.