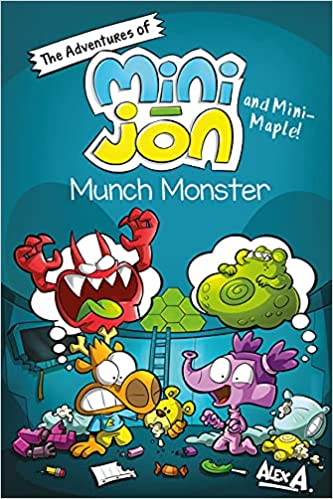 Part of a new series by creator Alex A., Munch Monster is essentially a spin-off from the popular ‘Super Agent Jon Le Bon’ graphic novel series. Aimed at younger readers, it follows Jon le Bon’s clone, Mini-Jon, and his friend, Mini-Maple, as they go on their own adventures while trying to keep out of danger (and trouble!) along the way.

In Munch Monster>, it’s bedtime for Mini-Jon and Mini-Maple, but they aren’t interested in going to sleep-- until they start to hear noises that they believe are coming from the Munch Monster, a legendary beast that will come and eat everything they love if they don’t go to sleep. After the “monster” comes along and eats some of their prized possessions, they have to figure out how to get him to stop before they lose it all. They finally figure out that they need to use their boss’s “no-fail beddy-bye” tape (Um…where can I get one of those? That sounds amazing!) that will instantly put them to sleep and stop the monster in his tracks. The trick is then how to get their hands on the tape without getting eaten on the way.

Munch Monster> is a cute, easy-to-read introductory graphic novel. I appreciated the choice of typeface which is large and clear but still very similar to most popular graphic novel fonts. The story includes some nice big vocabulary words (reverberates, devoured) that are included in such a way that their meaning becomes instantly clear from the context clues.

The illustrations are very similar to the familiar Jon le Bon series, with funny characters that aren’t recognizable as being one particular species. I love that each book seems to stick to a particular colour palette, with this one using primarily dark blues, greens, and purples.
As I often do, I passed this book to my eight-year-old and asked him to read it and tell me what he thought, just in case I missed anything obvious. He declared it “weird…the funny kind of weird though, not weird-weird” which is, I’m fairly certain, what the author was going for.

Allison Giggey is an intermediate school teacher-librarian in Prince Edward Island who recognizes and appreciates the difference between funny-weird and weird-weird.