Hop Skip and a Jump: ABCs to Healthy Living 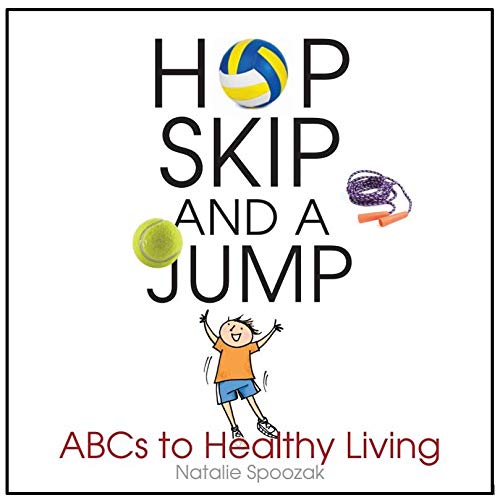 Hop Skip and a Jump: ABCs to Healthy Living

Parents: Basketball is a team sport that teaches children to run, jump, dribble, throw and catch. Kids can start at an early age, developing these basic skills while playing alone in the backyard or basement. Young children who play basketball improve their flexibility and endurance, and will also benefit from improved fine motor skills, such as hand-eye coordination, that transfer to other activities of daily life. Playing basketball on a team can help children learn team-building skills while making new friends along the way!

As the book’s subtitle indicates, Hop Skip and a Jump is an ABC book, but one with a theme, that being healthy living through activities and exercise. Each letter of the alphabet is treated on a single page with the letter first being presented in both its upper and lower case forms. As can be observed in the excerpt, author Spoozak then presents a word that begins with the page’s target letter. In turn, that word is illustrated by a full-colour photo. A secondary text, in a smaller font, alphabetically lists other activities that also begin with the page’s focal letter. What sets Hop Skip and a Jump apart from other alphabet books is an italicized text labeled Parents that describes for caregivers the value of a child’s becoming engaged in the page’s “word”. Completing the page is a Waller cartoon portraying a child engaged in one of the “Other activities”. In the case of Bb, a youngster is shown playing badminton.

The challenge with Hop Skip and a Jump is identifying its appropriate audience. The book’s paperback format suggests that it is not a beginners’ ABC book as this physical format would not withstand a toddler’s rough handling. Though the book largely employs the visual layout of an introductory board book ABC, in more than half of letters of the alphabet, there is not the expected direct correspondence between a letter’s word and the accompanying visual. The first two facing pages, Aa and Bb, illustrate this point, with the latter being the positive example and the former being problematic. A toddler looking at the photo of the basketball might use the more inclusive term “ball”, but they still used a Bb word. The photo on the Aa page includes a pile of sports equipment, including a set of golf clubs, balls from six different sports, a racket and a baseball bat and glove. And the word that Spoozak has chosen to represent this sports mélange: active And that’s the word that Spoozak expounds upon in the Parents portion of the page. The cartoon connected to Aa portrays a child, bow in hand, shooting an arrow at a target. To keep the book’s focus on the child, Spoozak could have selected an arrow as the representation of Aa while still addressing being active in the parents’ text. This repeated lack of correspondence between word and photo makes it difficult for children to return to the book and “read” it on their own.

As an alphabet book, Hop Skip and a Jump is wanting, and perhaps its strongest portions are the Parents sections directed at the adult reader.