Urgent Message From a Hot Planet: Navigating the Climate Crisis 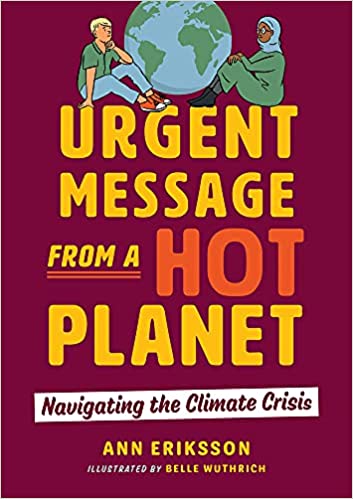 Urgent Message From a Hot Planet: Navigating the Climate Crisis

Permafrost covers over 24 percent of Earth’s surface throughout the northern hemisphere, mainly in Siberia, the Tibetan Plateau, Alaska, northern Canada, Greenland, parts of Scandinavia and Russia. It is ground that has been at temperatures below 0°C (32 °F) for at least two years. In places permafrost can be up to 1,000 meters (3,300 feet) deep. As it thaws in response to global heating, it becomes unstable and at risk of collapsing, leading to erosion, sinkholes, landslides and flooding. In some parts of Siberia, land has collapsed to a depth of 85 meters (280 feet). Permafrost stores vast amounts of carbon (1,460 to 1,600 gigatons), almost twice as much as what’s contained in the atmosphere. It also stores methane, in smaller amounts than carbon but with a greater warming effect. According to the National Oceanic and Atmospheric Administration’s 2019 Arctic Report Card, thawing permafrost could be releasing as much as 300 to 600 million metric tons of net carbon, in the form of carbon dioxide and methane, per year.

Part of the “Orca Issues” series, Urgent Message From a Hot Planet: Navigating the Climate Crisis, a well-researched and thorough book, examines current climate-related problems, the history behind them and what steps humans can take in order to save the planet. Author Ann Eriksson brings her wealth of knowledge and experience as a biologist and science writer to the book, and, though it seems, at first, that her message is one of doom and gloom, she offers plenty of examples of climate heroes, individuals, organizations and governments, that are doing their part to ensure that climate change is kept in check in order to prevent further damage and, possibly, to reverse it somewhat.

The book consists of six chapters with the main body of the text enhanced with relevant sidebars. Interspersed throughout the book are text boxes titled “Burning Question” which ask readers to think about issues such as what should be done about climate migrants or whether or not to have children in these troubled times, and “Youth Voice” which contains quotes from articulate young activists. Eriksson posits that the climate crisis is not a single problem but, actually, has three components: global heating, ecological destruction and inequality. Though readers are likely familiar with the impact of wildfires, flooding, fossil fuels, desertification and deforestation, there are so many other aspects of global warming that most people have not considered, or, perhaps, even heard about. For instance, increased carbon dioxide in oceans makes sea water more acidic, causing the shells and skeletons of marine animals to dissolve; rising sea levels have resulted in many countries planning to move essential infrastructure, such as hospitals, power plants, schools and landfills, to higher ground and having to remove toxic or nonbiodegradable materials to prevent them from polluting the ocean as water levels rise; and, finally, the dangers of melting permafrost which killed a 12-year-old Russian boy and hospitalized several members of his nomadic tribe after they were exposed to deadly anthrax bacteria released through the permafrost. Readers will also be introduced to the term “eco-anxiety” (also known as “climate anxiety”) which refers to the feeling of worry about climate change.

Though some of the facts in this book are downright scary, for example that, by 2025, two-thirds of the world’s population will be living under water-stressed conditions, and that the current ecological footprint is one and a half times what the Earth can provide (the North American lifestyle is actually 4.5 times what it can provide!), the author ends on a positive note and explains not only what some countries are already doing (one example being that educating girls is actually a climate solution), but she also offers suggestions as to what private citizens and governments can do to stave off further climate crises. Among other things, she suggests that governments should stop subsidizing the fossil fuel industry, impose a carbon tax and encourage farmers to shift to agricultural practices that regenerate soil health; individuals can install solar panels on the roofs of their homes, buy and consume less, buy local, create community gardens and use bicycles and public transport. The important thing, Eriksson states, is to understand the climate science behind global warming and to be mindful of the fact that everything is interconnected and that the choices one makes have a consequence.

Illustrations consist of colour photographs, cartoon drawings, graphs, charts and diagrams. Of particular note are some of the interesting and thought-provoking art images, one example of which is an hour glass depicting a polar bear sitting on a melting ice floe as it drips water into the sea, raising sea levels. A table of contents, a glossary, an index and a list of print and online resources are included.

Urgent Message From a Hot Planet, with its powerful and urgent message, is a must-read. Guaranteed to spur some readers to action, it is both frightening and hopeful. To quote the author, “From everyone I interviewed, I learned that action breeds hope and that action taken with others is an antidote to despair.” Hear, hear!