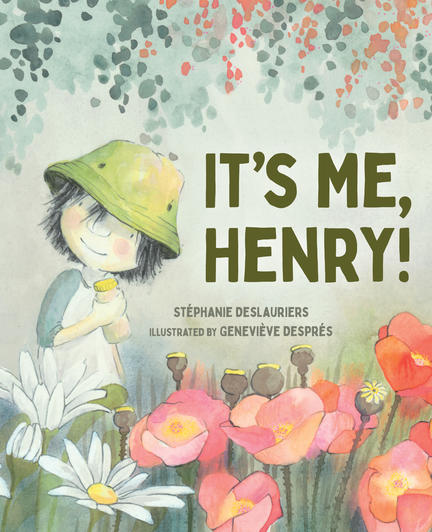 All through dinner I talk about tomorrow’s year-end field trip. I’ve been waiting for this day for so long. The Botanical Garden is my favourite place on the whole entire planet. I even have my own annual pass. I know almost all of the employees, like Ms. Rose and Mr. Haywood. I hope they’ll be there tomorrow!

It’s Me, Henry! is told from school-aged Henry’s perspective, and the first thing he shares is that he has a friend named Daisy at school. Unfortunately, Daisy absolutely disagrees with him about their friendship. She says that they aren’t friends because he calls her canthemum vulgare, her ‘real name’ in the plant world, and that she prefers to call things by their real names. His confession about a complicated friendship is accompanied by a botanical drawing of the daisy plant and a drawing of a girl with her arms crossed. Daisy’s facial expression and posture demonstrate a lengthy unhappiness with a classmate who insists on calling her by the wrong name.

Each page of Henry’s story provides a window into the world of a boy who has difficulty in fitting in at school: he can’t stop himself from interrupting other children during a math lesson when he knows he has the right answer; he is bothered by the loud sounds of recess and retreats to a quiet, cool space under a willow tree for comfort even when older children tease him for sitting there alone. He is able to return to the school with the help of a school counselor and sit with her in a room filled with children’s drawings, but he cannot return to his classroom until he feels calm again. Henry is aware that he needs the quiet of the trees to feel calm, but he’s not aware that his classmates are bothered by his interruptions or of Daisy’s discomfort with being called by a botanical name instead of by her proper name.

In Geneviève Després’ illustrations, Henry’s face and body are always delicately portrayed through realistic colours while the people surrounding him are illustrated in black, white and greys, allowing Henry and the surrounding flowers and trees to draw focus. When Henry arrives home after his difficult day at school, he is bursting with excitement that his class will be going on a year-end field trip to the Botanical Gardens where he has an annual pass and knows the staff by name. On the pages where he is describing the day to his parents, he is surrounded by giant, joyful sunflowers, daisies, poppies, vines and berries, with some so much larger than the furnishings and people that they must represent their importance in his life. The reader can imagine that Henry must always be surrounded by happy thoughts of his favourite topic.

On the morning of the field trip, the page is filled with a warm, golden light, and Henry smiles as he carries the important tools of a botanist into the garden: his notepad, magnifying glass, and water bottle. He is encouraged to share his extensive knowledge by the tour leader and is pleased when Daisy and his classmates respond positively to his facts. When the guide asks the children to find a partner for an activity, Henry, having always been without a partner for school activities in the past, is surprised when Daisy asks to be his partner. As they return to the school bus, his teacher awards him a four-leaf clover for exemplary behaviour, saying that they were fortunate to have him share his knowledge and passion with them. Henry reflects on his happiness, thinking, “Maybe it’s not so bad being me. Maybe… it’s actually very cool.”

Henry’s story, with its perfectly crafted sentences and images of a boy who is experiencing emotions that many children will find familiar, would be a pleasure to read aloud. This story is a tender introduction to the life of a child on the autism spectrum, and it perfectly shines the spotlight on the endearing main character – a boy with a passion for the natural world, a sunny personality, and a desire to be a part of his class. There is so much to love about It’s Me, Henry!.

Penny McGill is a library assistant in the Collections Department of the Waterloo Public Library in Waterloo, Ontario.