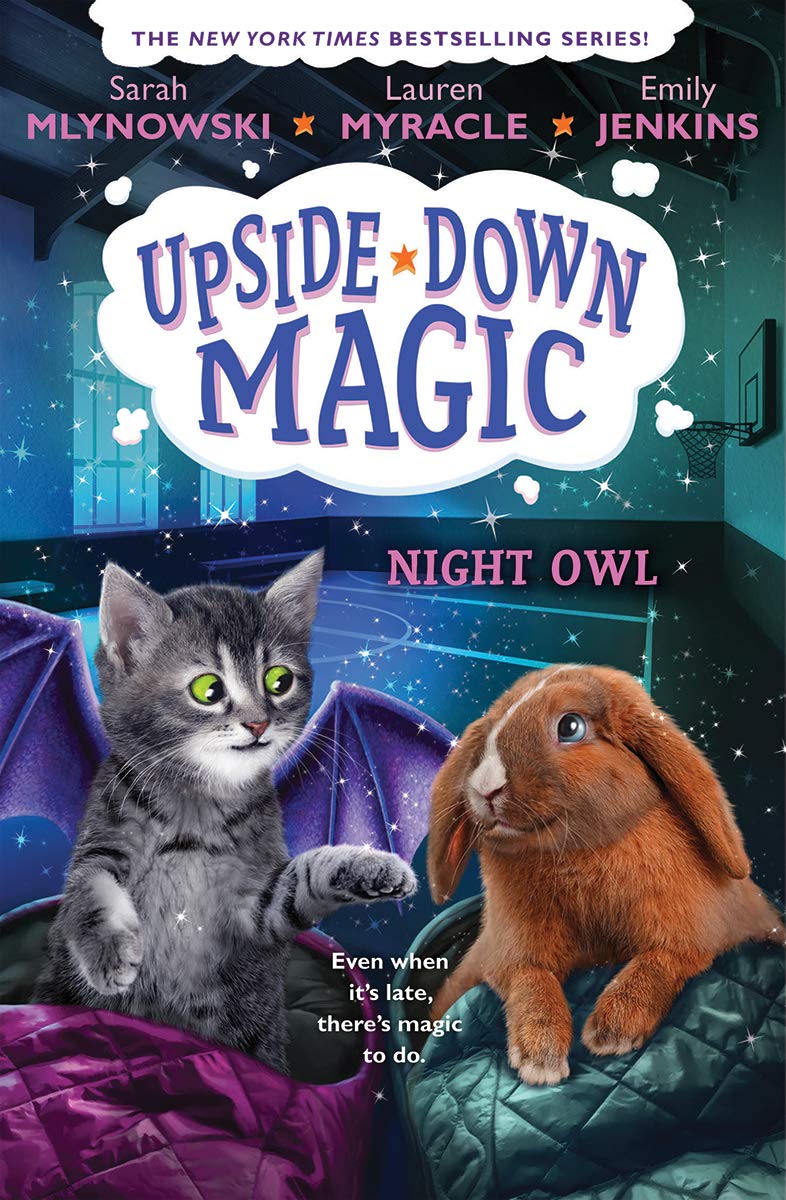 Sebastian walked into the gym wearing his goggles. Then he almost turned around and walked back out again.

There were kids everywhere. Their excited chatter came at Sebastian in brightly colored waves. It was kind of like walking into a room and having an ocean wave splash over you. And then another. And another.

You can handle this, he told himself. You have to handle this so you can win the secret room.

And then – WOOOOOONNNGGG! Coach blew the most enormous air horn Sebastian had ever heard in his life. Sound waves zoomed through the gym. Sebastian cowered.

Oh, wow, it was going to be an intense night.

Big Night is a huge celebration at Dunwiddle Magic School. Every year, to celebrate the longest night of the year, the fifth graders have an epic sleep over and compete in a scavenger hunt to win the ultimate prize: a secret room on school grounds that only the winning team can
use. Not surprisingly, Nory and her friends are in it to win it.

Representing the Upside-Down Magic class are two teams. On one side are Nory, her best friends Elliott and Pepper, and Andres. Nory has mixed feelings about this year’s festivities. She’s super excited about the scavenger hunt, but, at the same time, she is sad because this is the last night she’ll have with her best friend Elliott before he heads off to the prestigious boarding school Sage Academy. Nory believes that, if her team wins, Elliott will decide to stay at Dunwiddle, and so she wants to win at all costs.

On the other side are Sebastian, Willa, Bax and Marigold. They, too, are super excited to win the scavenger hunt, and they believe they’ll win because of their secret weapon, Sebastian. Sebastian has the ability to see invisible things, including sound waves which can be very painful. To help ease his pain, he brings along his goggles and a cone that soften the noise, only to discover that his friends are embarrassed by his appearance.

Not surprisingly, Big Night doesn’t go off without a hitch. Nory and her team do win the scavenger hunt, but her plan backfires. Elliott is still going to Sage Academy, and no one can change his mind. Sebastian, on the other hand, has to come to terms with the fact that his
abilities are only getting stronger and his friends don’t necessarily understand what he’s going through. But, of course, not all is lost as Nory and her winning team ultimately empathize with Sebastian and hand him the keys to the secret room so that he can have a quiet space all to himself at school.

In this eighth installment of the “Upside-Down Magic” series, Nory and her friends must come to terms with change. As friendships are tested, the entire class must learn that with every new beginning comes loss and that letting go is all a part of growing up. Night Owl is a very delightful read with a very important message.

Teresa Iaizzo is a librarian with the Toronto Public Library in Toronto, Ontario.