The Wonders That I Find 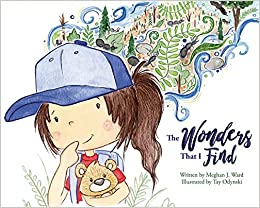 The Wonders That I Find

From the top, you’ll see for miles

To landmarks far and wide.

You’ll see the crags and pinnacles

That form a great divide.

Geneva and her parents are going for a mountain hike! While her mom and dad are in a hurry to get to the top, which has an incredible view, Geneva finds many small wonders to observe along the way.

As Geneva’s family begin their hike, Geneva is immediately intrigued by a line of ants carrying a variety of items. Seeing Geneva stop, her father reminds her to keep moving and that there is a fantastic vista at the end of their journey. Geneva stops several more times throughout their hike, and each time is implored to keep moving. When the family finally reaches the pinnacle of their trek, the view is indeed awe-inspiring. While Geneva agrees that it is lovely, she tells her parents that she has observed equally wondrous things along the way and asks to share them on the way back down.

Told using rhyming text, the poetry has a pleasing rhythm. There are a couple of small hiccups in the rhyme scheme, but nothing that is overly distracting. Unfortunately, the verb tense changes a time or two to accommodate the poem. Readers may find this jarring. The vocabulary is rich and sure to introduce young readers to words that they have never heard before (such as “uncoiled”, “summit”, and “crags”).

The illustrations are on the whole pleasant but shine in the panoramic spreads. The artwork appears to be done primarily using watercolour. The palette is reasonably colourful and, unsurprisingly, features green in a variety of hues. Geneva’s teddy bear can be seen in many of the scenes. For the most part, the bear mimics whatever Geneva is doing or feeling. While it adds an amiable element to the story, it could have been used to greater effect. The illustrations are a direct reflection of the text. This is not entirely surprising as the text is so descriptive.

There are few humans in this story other than Geneva and her parents. The family is white, of slim build, and have no disabilities depicted in the text or artwork.
The Wonders That I Find is a charming ode to nature and to noticing the little things. It’s a book that’s sure to get young readers excited about exploring the great outdoors.

Sadie Tucker is a children’s librarian at the Vancouver Public Library and the social media administrator for YAACS, the children and youth services division of the BCLA.