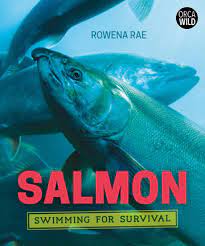 In the early days of agriculture, forestry, mining and town building, people didn’t think about the consequences of cutting all the riparian (streamside) vegetation to clear land right to the edges of streams. But without tree canopies shading the water, it warms up. Without roots holding the banks in place, soil crumbles into the stream. Without overhanging branches and trees to fall in from the edges, the stream loses its hidey-holes and its rainfall of bugs.

As well as cutting down the riparian vegetation, we’ve drained wetlands, cut rivers off from their floodplains and in some places even straightened rivers into concrete-lined canals. We’ve blasted riverbeds with water from high-pressure hoses to mine metals, and built dams and other barriers to extract water or generate power. We’ve polluted river water with agricultural runoff and with industrial and urban waste. Pollution affects how juvenile salmon grow, how many eggs an adult female produces and even the ability of a mature adult to find its birth stream.

Joining many recent publications about salmon, Rae’s book offers an extra layer of current research that makes it a valuable addition to the library on this topic. Examination of the iconic fish goes way beyond the dramatic life cycle details, beyond their critical role in ecosystems, and beyond their historic and cultural importance. It digs deeply into the complex threats from human activity to the wild salmon’s survival, and its scope is worldwide. Described as “the four Hs”, they include harvest (the fishery), habitat, hydropower, and hatcheries (including fish farming). An additional ‘wild card’ threat is climate change and its impact on salmon, the extent of which scientists are still discovering. The book features details of not only Pacific salmon but also Atlantic and land-locked species.

In the “Introduction”, the biologist-author shares a personal moment snorkeling with salmon migrating up-river to spawn, demonstrating her passion for these determined fish. Ten chapters discuss the various aspects of salmon life. The first three describe the species, its life cycle, and its place within aquatic ecosystems. Two more chapters summarize the characteristics of Atlantic and Pacific species, their history and current status. The focus of Chapter 6 is harvest, a major threat due to overfishing. Fishing methods have generated controversies around sustainable practices to conserve the species for commercial and recreational fishing. Chapter 7 deals with habitat loss and damage due to negative impacts of agricultural and industrial development, and dam building. A most interesting part of this chapter concerns several recent dam-removal projects that will open up historical habitat for migratory fish.

Ocean habitat is examined in Chapter 8, especially the challenges salmon face in warming ocean waters. Readers will find out how some salmon prey are less abundant while diseases may be enhanced in warm water. Less oxygen is available, and water is becoming more acidic: both are threats to fish. They might also have to share habitat with newcomers–‘range shift’ means invasive species move into warmer ocean areas, too. In Chapter 9, the concept of increasing the wild salmon populations by releasing hatchery-raised salmon fry would seem a positive process until how this process might compromise wild salmon genetic fitness is taken into account.

Chapter 10’s focus is fish farming (using mostly Atlantic salmon), another practice which is inspiring debate. Both sides of the issue are discussed in some depth here. Readers learn that fish meal produced from small wild fish is an inefficient and unsustainable way to produce farmed salmon, but that insects and feather-meal are being researched as alternatives for ingredients in fish-feed pellets. Concerning the problem of fish farm escapees, readers learn of the risk to genetic fitness of wild Atlantic salmon but not to Pacific salmon, although the escaped fish do compete for food. Sea lice become a serious problem in highly populated net cages and can spread to wild fish. Chemical treatments are a risky option: alternatives include land-based cages, or placing the cages far off the coast. The reader is given plenty of information to decide if salmon farming jobs and their economic contribution are enough to balance the risks.

In a short “Conclusion”, the author poses the question, “How do you want the future to look?” because what affects salmon and their ecosystems also affects humans. A page of ideas that readers might embrace to create that sustainable future includes joining a river-guardian group, investigating the source of seafood we buy, or simply spending time outdoors to appreciate our all-encompassing connections to nature. The “Glossary” is extensive to define vocabulary in colored text. Selected print, online and video resources are listed as well as an invitation to find more listed at the publisher’s page for this book. An “Index” will be included in the finished copy.
Well-captioned and credited photos are nicely integrated with the text. There is also illustrative material such as maps to show boundaries of salmon habitat and satellite tracking routes, charts with life cycle information, and drawings with details of traditional Indigenous fishing technologies. An easy-to-read double-spread of “Salmon Stats” is included, covering all salmon species. Inserts add extra valuable facts: e.g. “Go Wild” sections explain the term ‘landlocked’, how salmonberry bushes seem to grow widely along salmon streams, and how sea lions and seals have found rich feeding grounds near fish ladders and are tough to discourage. Another insert, “Jumping In”, focuses on individuals of all ages who support salmon initiatives through their profession, in volunteer organizations or for personal interests.

The content and reading level are generally well-suited to the “Orca Wild” series target readership of ages 9-12. One aspect that may appeal more to an older reader concerns the “Jumping In” inserts. They use a very small font size, with considerable content, so have a text-heavy appearance. Similarly, one single insert, “What is a Population?” fits the text within a salmon outline and is even tinier print. While this style may discourage less able readers, those who take the time to read carefully will find a wealth of good, up-to-date information.

The subtitle, Swimming for Survival, points to the vital theme that we must consider if we want the salmon species in our oceans to be around for future generations. This comprehensive book has a great deal to offer to help everyone understand the critical nature of salmon conservation.

Gillian Richardson is a freelance writer living in British Columbia.