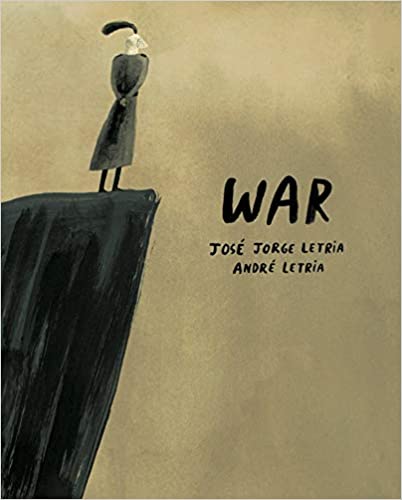 War spreads through the day like a whispered, swift disease.

Father and son team, José Jorge Letria and André Letria’s picture book collaboration, War, was recognised with the prestigious Nami Concours prize. The prize is intended to “encourage artists’ creativity and contribute to the advancement of the quality of picture book illustrations.” With such goals in mind, it is not difficult to see why War was adjudged a worthy winner. The quality of the Letrias’ work has been acknowledged with several awards throughout their writing and illustrating careers. War was originally published in their native Portugal in 2018, but it is such a formidable and important book that publishers have decided not to confine its distribution or potential for educative value. Its release in Canada is no doubt part of a worldwide distribution plan.

The sparse, evocative written text is matched powerfully by the sombre illustrations to convey a potent anti-war message. The book begins with spidery figures and snake-like shapes creeping and slithering ever forward. The beings eventually infect a bird, and their destructive virus spreads across the world and throughout the book.

The solemn word choices and gloomy illustrations convey the darkness and futility of war in ways reminiscent of the work of the best World War One poets. The shadowy watercolour artwork is largely devoid of colour—blacks, browns, and greys predominate. The illustrations cast a pall over the reader as the darkness of war spreads throughout the book. As the written text says, “War saddens, crushes, silences.”

War is a book to be revisited several times. Each new reading reveals new layers to the work. It is thought-provoking and powerful. It is not particularly a book to be enjoyed, but it is a book to learn from. As people seek peace, there is so much then to be enjoyed. This is not likely to be a book that cheery parents and grandparents rush out to buy for the beloved children in their lives; yet, it is a book that can serve as a resource to facilitate difficult, but important, discussions with children about war.

Dr. Gregory Bryan is a member of the Faculty of Education at the University of Manitoba. He specialises in literature for children.