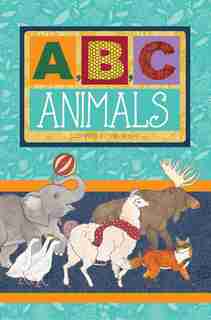 D is for duck.

Originally published in 2016 as a 32-page hardcover book, ABC Animals has been revised and republished as a board book.

As the book’s title suggests, ABC Animals is an alphabet book, one in which each letter of the English alphabet is represented by an animal. Each focal letter is initially presented in its upper case form; however, when the letter is used within its sentence, it then appears in lower case. In the 2016 version, the text for each letter was limited to just a single word, that being the name of an animal, and so no thought really had to be given to the fact that some upper case letters, such as D, undergo a significant metamorphosis when they are used in lower case. Nonetheless, Hosoya dealt with the possibility of that problem in the 2016 book by using the last pair of facing pages to present the entire alphabet but with the letters being shown in both their upper and lower case forms. Those pages do not reappear in the board book. The board book’s text uses the listener-inviting repetitive pattern of [UC letter] “stands for” [name of animal].

Design-wise, up to and including the letter K, each letter of the alphabet has its own page, but, from L forward, anywhere from one to three letters may be found on a single page. Hosoya’s illustrations of the animals are placed against solid and/or textured backgrounds. With the exception of U’s Unicorn, the remaining animals in A B C Animals are a mixture of the more common, such as C’s Cat, P’s Pig and S’s Squirrel, along with the more unusual, like I’s Indri, N’s Newt and X’s X-ray fish. Some of the animals, including H’s Hedgehog, Q’s Quail, V’s Vole and Z’s Zebra, are illustrated as they might appear if seen in their natural habitat, but many of the animals have something unusual added to them. For instance, O’s Owl is shown holding what appears to be a coffee cup, a possible explanation for why it can stay awake all night. But why does I’s Indri have a phone, J’s Jaguar a crown, M’s Moose ice skates, R’s Racoon a trumpet and T’s Turtle a pocket watch? Hosoya doesn’t provide any answers, but, instead, she allows the reader and the person being read-to to suggest and arrive at their own answers.

Readers need to return and examine the illustrations or patterns contained within the outline of each block upper case letter as Hosoya was quite purposeful in their completion. Again, Hosoya wordlessly invites readers to answer, “Why?”. Why is the G in Giraffe filled with clouds, why is the M in Moose filled with green and white triangles, why are there what appear to be slices of pizza in Raccoon’s R, or why is there a mountain within Yak’s Y?

ABC books are often associated with a child’s earliest years, but the more challenging contents of ABC Animals would suggest that it could continue to be used with children though kindergarten age. The lightly embossed animals on the book’s cover deliver a tactile treat before readers discover Hosoya’s visual delights inside.