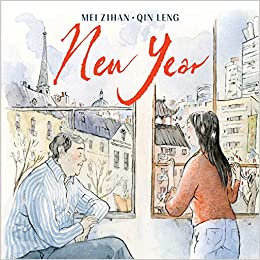 When I come to see you in Paris at your home on Avenue Victor-Hugo, I watch you fervently cooking French dishes and Italian pasta. Though it saddens me to see you work so hard for such a simple meal, it also somehow puts my heart at ease. You really are all grown up. You are no longer a child in your home, in that land full of sundry flavors.

In your journey, you have learned to accept new things, acquire new choices and new excitements. You are no longer that madeleine lover in search of lost time. Under an unfamiliar tree, you pick a fruit which you cannot name and smile happily.

Picture books often contain stories geared towards a young audience, but some authors have written in this genre for a broader or older audience. Written by Mei Zihan and illustrated by Qin Leng, New Year exemplifies an interesting adaptation of the genre to tell a poignant story about a father-daughter relationship that will appeal to people of all ages. Originally published in 2019 in China, New Year has now been translated into English

The book is told from the perspective of a father who reminisces about his daughter and reflects on her life abroad. His recollections are framed by Lunar New Year, which is an annual Chinese event that is traditionally celebrated by spending time with family, eating together, and celebrating the incoming year. The arrival of Lunar New Year heightens the father’s longing for his daughter as it brings back memories about her childhood in China and his interactions with her. A particular sequence of pages conveys the emotional impact of the father’s memories about his daughter as she grows up. For example, he recollected when she was seven-years-old and was walking home with a big stuffed bear that he had bought her. On other pages, he recalls her carrying a lantern carefully to kindergarten or going to the nearby temple to pray for a high mark on her college entrance exam.

New Year is whimsical and nostalgic at the same time that it is poignant and somber. By representing the varying spectrum of emotions that memories can evoke, Mei shows how memories are complex, fluid, and evolve in significance over time. The father’s sentiments and mixed emotions towards his daughter are those with which many parents will identify. He longs for his daughter who has left home and desires for her to return to China, but, at the same time, he is proud of his daughter’s accomplishments and independence. Although he can hang on to the memories of his daughter’s childhood, his fond recollections are tinged with a sense of loss, regret, and despair as he realizes that things cannot return to how they used to be. As his daughter has settled in France, he understands that he cannot fully be a part of her life and that he must avoid projecting an idealized image of her as a child, frozen in time and detached from their respective lives in the present. He reflects on what she eats on New Year’s Eve and contemplates that, perhaps, she would be happier back home since he can tell that she does miss them. However, he comes to terms with the reality and wishes a Happy New Year to his daughter.
Accompanying Mei’s narrative text, Qin’s illustrations help to convey the layered, fragmented, and transient nature of people’s memories. They are moments in time that one can grasp momentarily and are connected to specific places, events, and details. In Qin’s illustrations, background details evoke the atmosphere of life in China and France as well as of domestic scenes. In one illustration that shows the father’s daughter preparing a chicken for roasting, Qin enhances the scene’s realism with surrounding details such as the stove, refrigerator, towel hanging on the oven door handle, notes on the fridge door, as well as wooden spoons and cooking wine on the counter beside her. As another example, on the page where the father recollects his daughter as a seven-year-old, the accompanying illustration shows a Chinese temple and surrounding architecture, images which help to convey that the setting is China.

Besides illustrating the story’s plot development, Qin includes symbolic images that contribute to its emotional impact. For example, when the father reflects on his daughter’s life and what it means to grow up, the text is complemented by an illustration of a table that has a set of keys, receipts, and a framed photo of the daughter with her parents. It is not obvious whether the illustration depicts the father’s or daughter’s residence, but this is not a crucial detail as it does not detract from the illustration’s psychological impact. The illustration conveys the sense of distance and longing that arises when family members are apart, which could apply to either the father or daughter.

In another two-page spread, the left-hand illustration shows the daughter sitting in her bed and looking out the window at night whereas the other one shows her sleeping with a photo of her parents on the adjacent night table. This accompanies the narrative text that states, “It won’t do anymore to be constantly running to Mother and Father’s side. It would make her feel as though she hasn’t grown up, as though she doesn’t have what it takes to be independent, to live a life of her own with her new husband.” In this scene, the illustrations convey the daughter’s sense of longing for her life back in China that is not explicitly mentioned in the text, but that add an additional layer of meaning to the emotions expressed in the text about leaving home.

Due to the book’s themes, adult readers, in comparison to younger readers, may actually appreciate the story on an additional level. This is not to suggest that younger readers cannot enjoy the story because they can still identify with what it is like to miss people who have moved away or places that they have been. In addition, they will be drawn to the story’s colourful illustrations which evoke a gentle tone that suitably complements the tone of the story’s text. However, young readers will be unable to identify with the father’s thoughts and feelings because they lack the experience of being a parent and raising children. For example, they could grasp the father’s nostalgia about the past on some level, but adult readers will have the emotional maturity to comprehend and appreciate the complexity of the father’s emotions towards his daughter. With their more extensive life experience, adult readers can connect more viscerally with his feelings of loss and longing for his daughter.

The book’s language and narrative style are poetic and will make readers feel as if they are listening to a storyteller rather than reading a picture book. The book’s bibliographical information indicates that this is a translation of the original text. Without seeing the original text, it is difficult to ascertain whether any of the narrative’s meanings or nuances may have gotten lost in translation. Nevertheless, this English version seems to achieve its overall impact effectively. However, the story’s level of linguistic difficulty may be a potential impediment for younger readers. Although the general trajectory of the story’s narrative is easy to follow for readers of all ages, the narrative’s more suggestive or conceptual elements—such as the father’s almost philosophical reflections on his life and his daughter’s—may be lost on younger readers. In addition, because younger readers may be unfamiliar with words such as “sundry,” “madeleine,” and “nostalgic,” an adult may also need to assist them with reading and understanding the book.

The book’s cultural themes make it a good addition for any library collection that wishes to enhance its representation of cultural diversity. In addition, the book’s appeal to a wide audience will make it accessible and easily adaptable for discussion and analysis in the classroom. It could be considered from a thematic perspective or, more broadly, in terms of its contribution to the existing literature about memory and diverse cultural communities. Both teachers and professors can use this book to generate discussion about a variety of themes. These could include explorations around the significance of Lunar New Year in Chinese culture, the complexities of memories and their significance, and the impact of immigration upon people’s cultural identities and their relationships with the families whom they have left behind.

If New Year is added to a library collection, it would be valuable to ensure that the catalogue record contains suitable access points that make it easier for people to locate the book. Although this book is suitable for young readers and has been marketed as such by its publisher, Greystone Kids, the catalogue record should also identify that the book would interest adults, given how Mei approaches the narrative from an adult’s point of view. For example, the record could include keywords or phrases pertaining to the book’s key themes, such as immigration, memory, childhood, family dynamics or relationships, and Chinese and French culture. The record could also include keywords that relate to its geographical and historical contexts, such as China, France, and twentieth century.

More information about the author and illustrator is available at https://paper-republic.org/pers/mei-zihan/ and https://qinillustrations.com.

Huai-Yang Lim, who resides in Edmonton, Alberta, has a degree in Library and Information Studies. He enjoys reading, reviewing, and writing children’s literature in his spare time