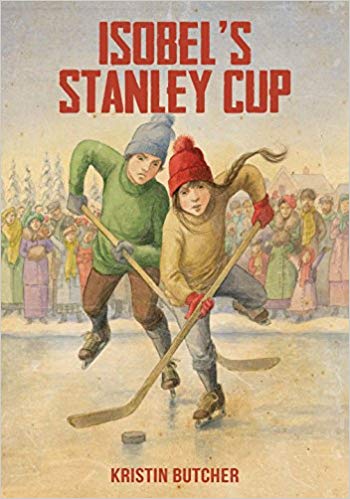 “They shouldn’t have won,” Isobel protested after the other team left.

Alexander shrugged. “We’ll get them next time.”

Her brother pinched her cheek and grinned. “We’ll get tougher and trickier. We’ll outsmart them. Right, boys?”

“Right!” They all cheered.

“You can help, Isobel,” Alexander said.

“When we practise you can pretend you’re the other team. Do every dirty trick you can think of and we’ll figure out how to outsmart you.”

“But Papa says I’m not allowed to play hockey.”
“You won’t be playing,” Alexander said. “Not really. It’s more like you’ll be coaching. Papa didn’t say anything about that.” He winked.

Isobel winked back and grinned. “No, he didn’t.”

Kristin Butcher, author of Isobel’s Stanley Cup, says in her bio note that she is married to a Toronto Maple Leafs fan and started watching hockey in self-defence until she got hooked on the game. In this, her twenty-sixth novel for young people, she tells an entertaining story while quietly underlining the importance of being a clean player and a team player.

Isobel Harkness is a pre-teen who lives in Ottawa with her parents and five older brothers. She wants to play hockey like them, but it is 1893 and her father says hockey isn’t appropriate for girls. When Isobel points out that the Governor General’s daughter plays hockey on the rink at his official residence, Rideau Hall, Papa says: “How Lord Stanley runs his family is his business. It has nothing to do with how I run mine. You may continue to skate, but there will be no talk of hockey.”

Isobel’s brothers play hockey with other youths on their street, Ossington Avenue, in Ottawa South (now known as “old” Ottawa South.) Their rink is a flooded field. As they practice for a match against the Seneca Avenue boys, Isobel skates on the periphery, observing. When the match takes place, she spots a rough player on the Seneca team who tries to strike Alexander in the head with his stick. Isobel saves Alexander by diving at him and knocking him out of the Seneca youth's way. Later, the Seneca player, Harry (as in “Dirty Harry”?) hits Fred on the leg, trips John from behind and elbows Billy in the face, thus enabling his team to win. (There is no referee.)

Isobel begins practising with the boys. After a shopping trip downtown, she and her mother go to Rideau Hall to skate, and there they watch Isobel Stanley, dressed in white, playing hockey with 13 other young women and scoring two goals. During the break between periods, Isobel Stanley comes to speak to Isobel Harkness and asks her if she likes hockey and if she plays. When Isobel Harkness admits to playing but says it’s a secret because her Papa disapproves, Isobel Stanley says that, at first, her father didn’t want her playing either, but he changed his mind, and maybe Isobel Harkness’s dad will change his mind too. When Isobel explains to the Governor General’s daughter that she is helping her brothers and their teammates by training them to avoid opponents’ dirty tricks, Miss Stanley says that the best strategy is to outskate the opponents so that they won’t get close enough to inflict injuries.

When Papa reads in the newspaper that Lord Stanley plans to donate an annual award, a silver cup, to the Amateur Hockey Association of Canada, Isobel is sure that the Governor General’s daughter was the one who persuaded him to do so. She wants her brothers and their teammates to try for this cup, but they point out that they would stand no chance as they would be competing against grown men. Then Isobel suggests a challenge tournament among the six street teams near Ossington Avenue (including the Seneca Avenue team.)

The climax of the story is realistic, showing that being a good team player is important. In less than a hundred pages, the author has created rounded, vivid characters who will captivate readers, even those who are not hockey fans. I especially liked Mama’s quiet support of Isobel.

Young players of today may be surprised by the absence of organized hockey for kids in those days and shocked by the absence of team sweaters or other insignia. Isobel’s mother knits red touques for each of the Ossington Street players, with one for Isobel as their strongest supporter. In her “Author’s Note”, Butcher explains the differences in the way hockey was played 130 years ago, gives a brief history of the Stanley Cup, and tells readers more about Isobel Stanley, a pioneer of women’s hockey. While the Harkness family is fictional, Lord Stanley and his family were very real, and Isobel was passionate about hockey. In 2000, the Isobel Gathorne-Hardy Award (Isobel Stanley’s married name) was created in her honour and given annually to a player at any level of hockey whose personal qualities, values and leadership are a model for all female athletes.

Isobel’s Stanley Cup is is enhanced by Kasio Charko’s cover illustration and Kristin Butcher’s illustrations throughout the novel. Butcher also includes a 1890 photo of Isobel Stanley and other women playing hockey at Rideau Hall. I hope that this tiny, perfect, uniquely Canadian novel will turn up under many Christmas trees this December.

Ruth Latta’s most recent novel, Grace in Love, is for grown-ups, but information about her three young adult novels is available on her books blog here.