Fire On the Mountain 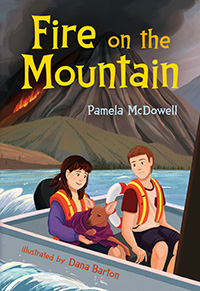 Fire On the Mountain

“Thunderstorms are the worst.” Shilo crossed her arms and stared out the window. The clouds had been building all afternoon, and now the sky looked grey and menacing.

“Uh-oh,” Cricket said. She studied the Jenga tower, not really listening, “Can you turn on the light? It’s hard to see the game.”

“That’s because of the stupid storm,” Shilo grumbled as she turned on the lamp. She watched Cricket slide a wooden block out of the stack and place it carefully on top. Thunder rumbled, bouncing between the mountains.

Cricket had lived in the little town of Waterton, in the middle of Waterton Lakes National Park, all her life. Thunderstorms were normal after a hot summer. She kind of liked the storms, especially at night, when she could burrow down safe and warm in her blanket and watch out her window as lightening crackled in the sky. The sound of rain pounding on the roof would lull her to sleep.

“What I don’t get is why we have thunderstorms almost every day, but no rain.” Cricket watched as Shilo tapped a block and eased it from the bottom as the tower swayed.
“Yeah, it’s so dry, the grass is crunchy. I had to wear shoes almost all summer,” Shilo said.

Cricket’s father, Warden of the Waterton Lakes National Park (in Alberta), tells Cricket that lightening has caused a number of fires to ignite in the mountain forests just west of town. Unfortunately, high winds are pushing the fires toward Waterton. As the fires get closer, Cricket, her friend, Shilo, and her older brother, Tyler, hope they won’t have to evacuate the town. But school closes, and the mountain-fire situation continues to worsen. While Cricket’s father leaves home to help, her mom reminds the children of all the things they can do to help fire-proof their property, such as clearing pine needles and leaves off the roof, putting patio furniture inside the garage, and gathering up old leaves. After doing this, Cricket and Tyler go to see if they can help others in the town. They assist in a number of ways, even collecting food (that would otherwise go in the garbage) from vacating shopkeepers in order to make sandwiches which they distribute to all the hungry fire-fighters who have piled into town. When it’s finally time for Cricket and Tyler to evacuate, Cricket rescues a fawn that couldn’t keep up with its fleeing mother. Cricket’s grandparents let her keep the fawn in their barn with their friendly sheep dog, and it survives the week that Cricket and Tyler are separated from their parents. When the children are finally allowed to return to Waterton (which did not burn) and their parents, the fawn is miraculously reunited with its mother as well.

Fire on the Mountain is author Pamela McDowell’s fifth book in the series with protagonist Cricket. This fast-paced, yet easy to follow story, was inspired by the real 2017 lightening-precipitated fire in Waterton National Park. Readers learn through Cricket, Tyler, and her friends’ observations, how forest fires can start and spread, as well as how animals behave when threatened by forest fires and what people can do in hope of protecting their property. Cricket’s father and grandparents also give readers some insight into the appropriate treatment of wild, baby animals. While Cricket has some emotional depth, the supporting characters in this story all have strikingly similar (generally positive and realistic) dispositions.

Karen Rankin is a Toronto, Ontario, teacher and writer of children’s stories.