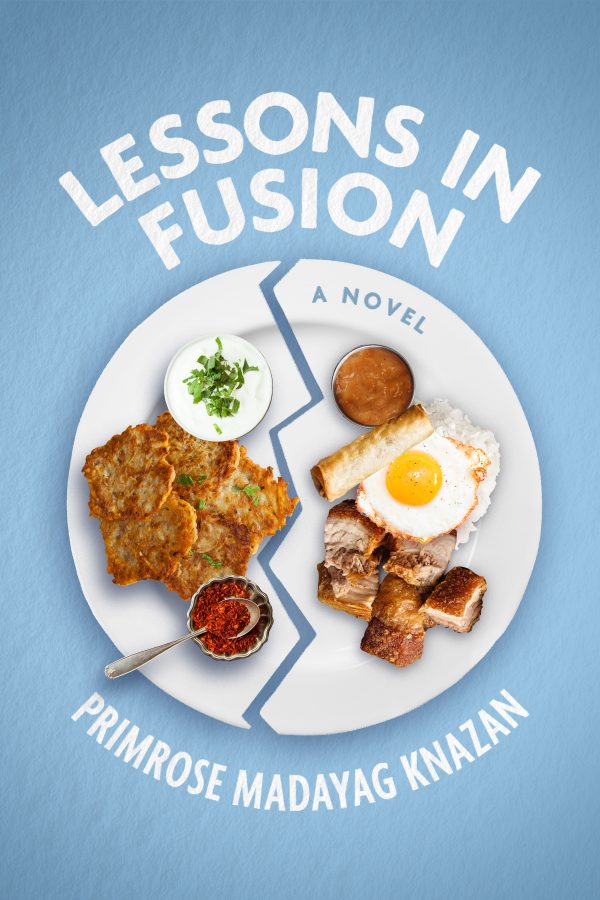 “I don’t know anything about being Filipino. I feel … robbed. When I became a contestant on Cyber Chef, I was encouraged to explore my culture but I didn’t even know where to start. My aunt, a professional chef, taught me how to cook Filipino food. When I learned about the food, I learned about my family. She taught me my Lola’s recipes, my mother’s mom. I never knew my grandmother had recipes. I didn’t know I had another grandmother I could learn from.”

They cut to a video of my Bat Mitzvah, my grandmother sitting at a table with my uncle and aunt, staring off to the side. The camera pans out and she’s looking at me.

I went back to sitting on the loveseat.

“Cyber Chef forced me to cook out of my comfort zone. It’s made me look at my culture in a whole new light. I think it brought my mother out of her comfort zone.”

The shot changed to the clip of my mother trying my Matzah Ball Sopas. A satisfied smile crept across her face.

“It’s delicious, Sar,” my mom’s wistful voice said, barely above a whisper. “My mother used to make a soup that tasted like this. It takes me back to childhood before things …got hard.”

The shot changed to me in the chair.

“The show has actually brought me and my mom closer together. It made me more sure of who I am. I am Filipino and Jewish. I am the fusion of two cultures in one. I think I can truly say, I am fusion cooking.”

Sarah, 16, moves from having a successful recipe blog to competing in a virtual cooking competition called Cyber Chef. She offers recipes from her Jewish Baba, but the show’s producers are more interested in the Filipino side of her heritage and push her to emphasize Filipino culture and cooking. This is difficult for Sarah because she has been raised Jewish, and, in fact, her mother appears to want nothing to do with being Filipino or introducing Sarah to that part of her family heritage.

Sarah is a feisty and determined young woman who knows a great deal about good cooking but is always ready to experiment and to learn more. This culinary journey involves learning and understanding her mom’s background and her reluctance to identify as Filipino. Sarah doesn’t hesitate to dig deeper and push her mother in order to hear more about her past, thus allowing them to become closer and more tolerant of one another.

Lessons in Fusion has lessons for its young adult readers about diversity and acceptance and the importance of both in our modern world. When people mispronounce her name, SAR-rah does her best to correct them, with varying results. Some people just don’t understand the importance or significance or her request. This lack of empathy shows up in the contestants on Cyber Chef who come from quite different backgrounds and cultures and don’t always respect one another’s opinions and experiences. Behind the scenes, the producers of the cyber competition also show that true acceptance of diversity goes far deeper than simply assuring different colours and races are shown on the screen. As the character Chef Kwan states in the novel, “Fusion…more than dumping one ethnic dish on top of another.”(p. 95) Sarah underscores the notion that true fusion of two different things should allow them to mix and enhance one another, each ending up better as a result.

Author Knazan moves from one city in Canada to another and shifts the story back and forth in time, but this doesn’t impact the interest or the continuity of the novel; it is only in these flashbacks that we readers can truly understand Sarah’s mother and her experiences growing up as a Filipino child.

Because the novel centres around a culinary competition, naturally much of the text is about food – not just how to create or make a recipe but also the important role that food plays in our lives. Our food is our culture as much as our language, our faith, our traditions. Knazan doesn’t just talk about food; she includes many recipes in the book as well. Like the contestants and judges on the cyber show, it is very tempting to read the recipes and imagine tasting delicious food.

Lessons in Fusion is very modern and includes social media as well as the difficulties of life during a pandemic, yet it is also the timeless story of one young woman who is coming of age as she discovers her familial roots and the much bigger story of the need for diversity and cultural acceptance in all facets of life.