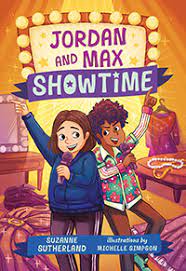 Jordan watched the other kids on the schoolyard as they buzzed together in clusters of friends, laughing and talking in what sounded like a whole different language. Their excitement only made him feel more lonely, like he was a visitor from a faraway planet. Like he was the only one of his kind.

True, he’d felt like an alien at his old school too, but at least there he knew what to expect. He knew the kids who thought his hair was funny because it almost hung to his chin, and the kids who teased him about his belly, which stuck out in front of him and was the palest shade of white. He knew exactly what time to leave at the end of the day to avoid his worst critics in the schoolyard, and which teachers he could complain to about having a stomachache, the ones who would let him go down to the nurse’s office until he felt better — or until it was time to go home, whichever came first.

This new school was an unknown world.

Jordan’s approach to feeling different was to avoid conflict by staying in the background and remaining as quiet as possible with the hope of being left alone. When he first saw Max, Jordan knew by his flowered shirt, his mirror sunglasses, and the fact that he was alone scribbling in a notebook, that Max, too, was different. Max’s approach to being different was the opposite of Jordan’s. When the class introduced themselves to each other, Max boasted about his talents and stated that he was going to be a star.

When the two boys teamed up to work on a school project, they were off to a rocky start. Max was overbearing, and Jordan was shy, but after working through some rough spots, it was apparent that the two boys had a lot in common. They were both from artistic families; Jordan’s grandmother had a closet full of costumes and wigs which she and Jordan used to perform in their living room. Max’s older sisters were a musician and a sculptor. The boys decided on a performance for school that included singing and dancing while wearing some of Jordan’s grandmother’s dresses and wigs. Even though the class didn’t “get” their performance, the boys did. Although neither of them were without flaws, they were friends because they shared some common values and interests.

Jordan and Max, Showtime explores the concepts of friendship and acceptance of yourself and others. The black and white cartoon format illustrations complement the text, including depicting the boys dressed up in female clothing and wigs for their performance. Teachers can use this book when discussing friendship, family, and identity.

Elizabeth Brown is a retired teacher-librarian who was formerly employed by the Winnipeg School Division in Winnipeg, Manitoba.