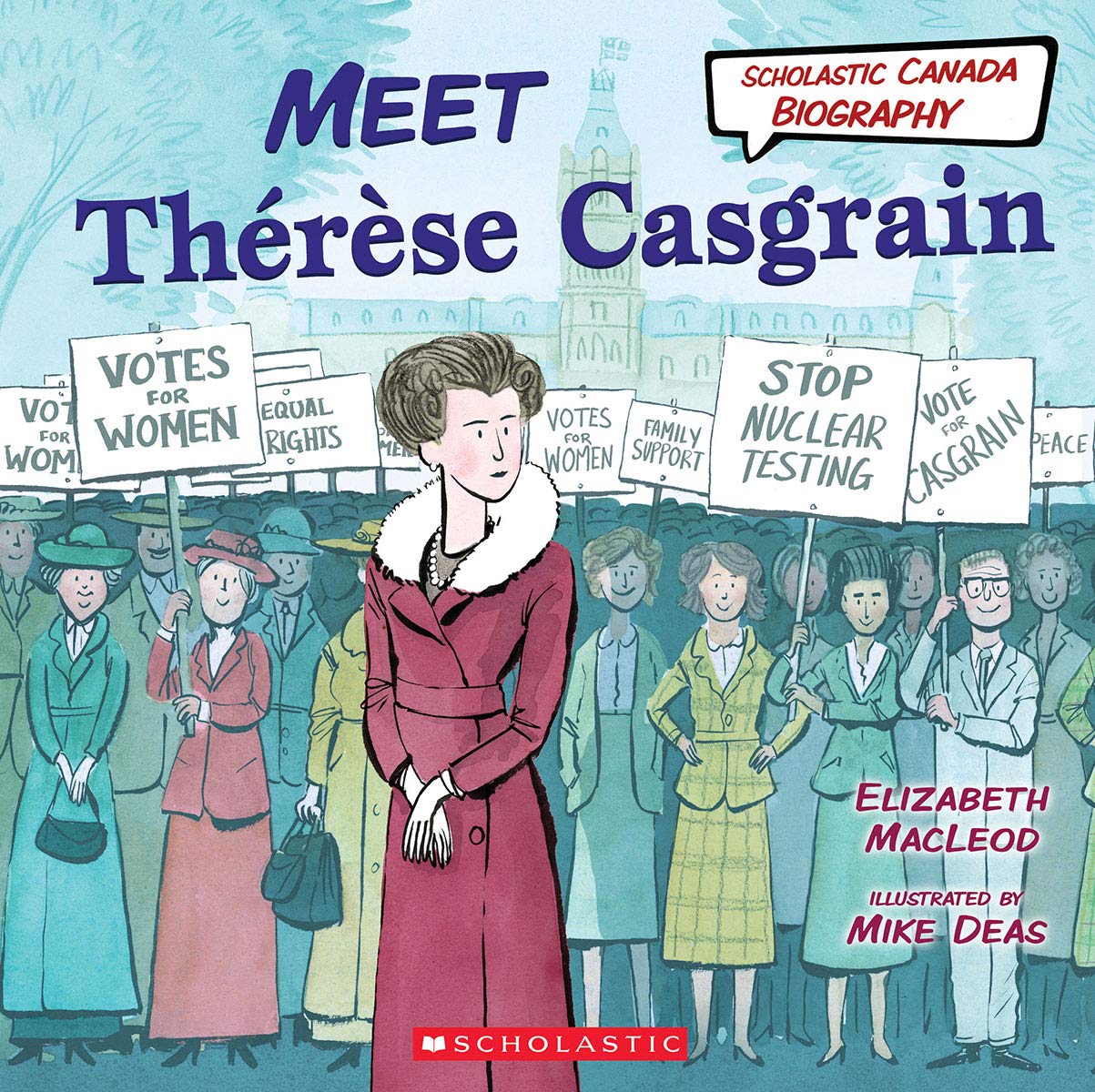 In 1946, Thérèse decided to join a new political party. She became a member of the Co-operative Commonwealth Federation (CCF).

She liked that the CCF tried to give everyone an equal voice in politics. She wanted bankers, teachers, farmers, and women who worked at home to come together to solve problems. But some of Thérèse’s rich friends didn’t like the CCF. Members of her family even refused to see her. (p. 16)

Meet Thérèse Casgrain, part of the “Scholastic Canada Biography” series, is an inspirational story of an exceptional Canadian woman who fought for justice through politics, activism, charity, medical aid and international peace work.

A chronological biography of Canadian heroine Thérèse Casgrain and her empowering journey as one of the first women in Canadian politics, including her being the first woman to lead a political party in Canada, the Quebec wing of the social democratic Co-operative Commonwealth Federation (CCF).

Growing up in the early 1900’s, Thérèse enjoyed a privileged childhood as the daughter of one of Quebec’s wealthiest men. At a young age, Thérèse learned humility and charity by helping her mother and other wealthy women donate food to struggling families.

Using her platform as the host of a national radio show, Thérèse worked tirelessly to amplify the voices of women. In April of 1940, after nearly twenty years of political effort, and with the help of Thérèse Casgrain, women in Quebec won the right to vote!

This biography, illustrated with Deas' cartoon style art and a few black and white photos, is suitable as a classroom support and is appropriate for any of the following subject areas: Canadian politics, and specifically political history in Quebec; Feminism; Remarkable Canadian Women; Women in Politics; Women’s Suffrage; Human Rights; and Political Activism with a Canadian focus.

A brief chronology of Thérèse Casgrain’s life can be found at the back of the book which may be appropriate for use in children’s book reports, class presentations, and projects on notable people in Canadian history. Written in a clear and uncomplicated narrative, Meet Thérèse Casgrain work condenses a rich historical account of a famous Canadian woman who, up until her death in 1981, had a long and illustrious political career.

Ashley Allen is a children’s librarian with Toronto Public Library in Toronto, Ontario.