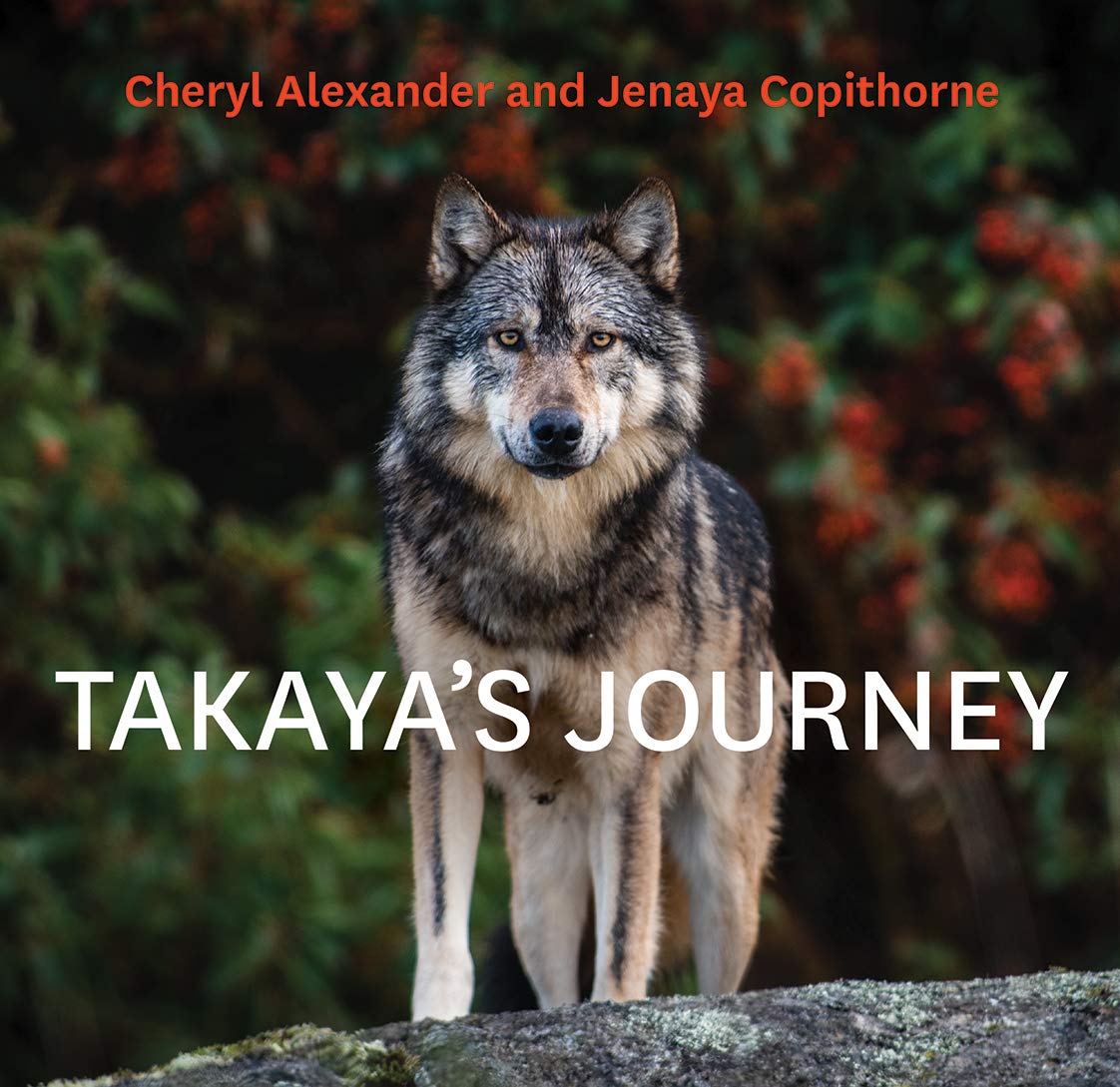 Takaya was a sea wolf that lived alone for seven years on a small uninhabited island archipelago off the coast of the large city of Victoria, British Columbia. Named after the Lekwungen/Songhees First Nation word for wolf, Takaya’s presence was well-known to those living in the suburbs, with his lonesome howls sometimes echoing across the water. His unique situation, a wolf choosing to live without the support of a pack, captured the interest of Victoria-based conservation photographer and environmentalist Cheryl Alexander, who, through her numerous visits to the island, developed a relationship of trust with Takaya. Alexander was able to observe the wolf’s activities, document his life in photographs, and collect thousands of hours of film footage. Takaya became the subject of several television documentaries, including an episode of The Nature of Things, with his story known worldwide.

It’s been over one year since Takaya was relocated to a wilderness area near Shawnigan Lake and was tragically shot and killed by a hunter. Alexander, who knew the wolf best, has used Takaya’s story to underscore the need for a ban on recreational wolf hunting in British Columbia, actively promoting a variety of initiatives such as education, petitions, art installations, global wolf howl events, and the Takaya’s Legacy website. To date, she has written three books about this unique wolf to encourage both young children and adults to reconsider the negative mythology of the “big bad wolf”. Good Morning, Takaya (2021) was co-written with author Alex van Tol and introduces very young children to Takaya and the other animals who live with him on his island. Takaya: Lone Wolf (2020) is a book for adults and documents the connection between Alexander and Takaya.

Intended as the first in a series about this wolf, Takaya’s Journey is a 48-page picture book for youngsters ages 6-8, and is co-written with Jenaya Copithorne. Takaya’s Journey is a visual feast, with each page featuring striking colour photographs which introduce this wolf. The cover photo shot is particularly stunning. It showcases the beauty of this magnificent wild animal while his piercing gaze seems to communicate a natural curiosity to the reader. Unlike many nature books for youngsters which examine a particular species as a collective, in this story Takaya is portrayed as an individual. The images cleverly, and very subtly, underscore the similarities between this apex predator and other dogs that children might also know, making the story relatable and accessible. The photographs offer a glimpse into the wolf’s daily activities, whether resting comfortably on a favourite knoll overlooking the ocean, trotting along a trail, swimming out to explore the oceanfront, or hunting for dinner. There are also pictures of other animals which inhabit Takaya’s island home and several photographs illustrating the scenery to develop a fuller sense of his surroundings.

No one is quite sure why Takaya chose to roam down the length of Vancouver Island and decided to make Discovery Island his home, but the authors offer a plausible explanation to explain the wolf’s actions. The narrative which accompanies the photographs is presented in a rhyming couplet form. The short lines have a comfortable, easy rhythm and age appropriate concepts and vocabulary have clearly been considered.

Takaya, the young wolf, is wild and free.
He loves to explore and to swim in the sea.
For two years, he lives, hunts, and plays in a pack,
Until a time comes when he has to make tracks.

After some time, when Takaya is grown,
He’s ready to start a new pack of his own.
He’s off on a journey, he’s ready to roam.
He wanders in search of a mate and a home.

The final lines of the book cast a positive light on Takaya’s story:

He loves his new home and so here he will stay,
Content to explore and to wander each day.
He howls every evening at the setting sun,
Glad that for now, his journey is done.

The authors have not mentioned Takaya’s tragic end anywhere in the book or jacket cover. Instead, the story chooses to focus on entertainment and helps children to understand and feel empathy for wildlife and their needs through the lens of this individual animal. As stated in the jacket blurb, the book also “aligns with basic school curriculum needs in terms of dealing with natural history and human encounters with wildlife in urban settings.”

At the end of the book, a “Resource Page” contains a list of 15 question prompts for teachers and parents to use to engage children in discussion about what they have read. Since the book centers on Takaya’s decision to remain in this new home as a lone wolf, these summarizing questions do a commendable job of helping children to build connections between their own world and that of Takaya’s.

Takaya’s Journey achieves its intended purpose to inspire future generations to foster greater compassion for the wildlife with which we share this world, and the book would be a highly recommended addition to a school library collection or a child’s bookshelf. It is an enjoyable read supported by a marvelous array of documentary photographs, and it clearly communicates the themes of home, adaptability, safety, and belonging. We can only hope that Takaya’s story, presented so simply and without embellishment, can raise awareness and, therefore, help to make change for the future protection and preservation of wolves.