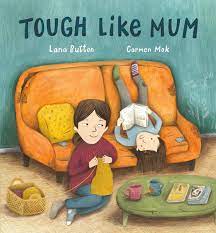 I did my homework but Mum didn’t sign anything—not even the field trip form! Next week we go on a bus to see a play, and my teacher keeps asking for my form.
I told Mum it’s due today! And I need six dollars, but that’s not here either.
Still, no matter how much I shake, she won’t uncurl.
“Don’t start on me, Kim!”
Her voice says, I mean it!

Tough Like Mum is a brilliantly child-centered picture book that demonstrates how poverty can feel to a child. It will appeal to readers age four through seven—especially those who are curious about how various kinds of families live. For children who live in poverty, Tough Like Mum will provide an inspirational example of how persistence, creative problem solving, and adult advocates can sometimes help children achieve their goals.

Tough Like Mum is narrated by Kim, a primary school-aged girl who’s described as “Jen’s kid. Just as tough as her mum” by her classmate’s father. The story focuses on Kim’s desire to attend the upcoming school field trip which conflicts with her need to help her mother feel safe and loved. The logistics of the field trip coincide with her mother’s falling into a slump, and Kim immediately realizes that her mother “looks…like she could use some soup”. After preparing dinner with end-of-the-month pantry leftovers, Kim reads aloud while “Mum listens and laughs at all the funny parts”. Kim’s mother then finally signs the form requesting financial aid for the field trip. Readers are assured that this has not caused strife between the mother-daughter pair because on the next—and final—page, Kim describes how they “like to lie in bed, and whisper silly stories, and snuggle close together”.

The last illustration in the book portrays the mother and daughter doing exactly that. Although this final image conveys cozy domestic security, the illustrations are appropriately sombre throughout Tough Like Mom, with a subdued colour scheme of grey, dark blue, and murky green that’s “rendered in gouache and colored pencils”. The occasional note of hope shines through in details like Kim’s red mittens and yellow sweater. Similarly, Kim and her mother are visually represented most often with frowning facial expressions, but they are shown with half-smiles on their faces when Kim serves soup for dinner and full smiles when Kim reads aloud and when Mum signs the permission form. The visual scheme of Tough Like Mom effectively parallels the moods and narrative progression of the story.

Tough Like Mum will prove a welcome addition to any home or institutional library committed to creating a collection that reflects the diversity of the actual Canadian population, in which approximately one in five children lives in poverty*. Besides race, ability, and gender, class is another important social variable that requires careful, accurate, and respectful representation in picture books. Tough Like Mum provides all of this and more.