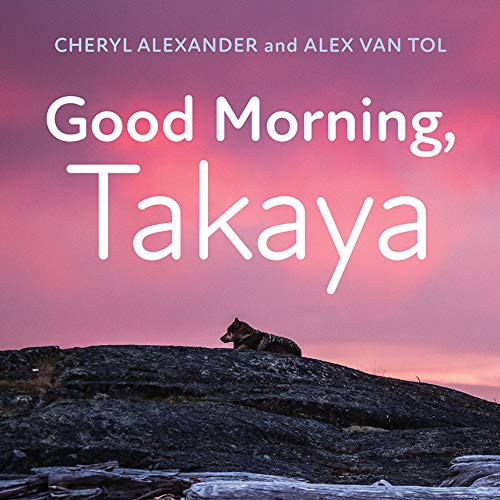 You pause to watch geese

in the PURPLE wildflowers.

A lone wolf who lived on a small group of islands off the coast of British Columbia for many years, Takaya captured the world’s imagination as a symbol of resilience. Takaya was a sea wolf, a rare species of this canine which lives in coastal areas and eats salmon and shellfish instead of deer and rabbit. Takaya swam nearly three kilometres from Victoria to the islands where he made his home for eight years. Here, he captured attention not only for his journey, but also because, while most wolves live in family groups, he was alone, and he thrived on a much smaller area than wolves typically need.

Cheryl Alexander, a conservation photographer, documented his life and has written several children’s books about this mysterious wolf. Good Morning Takaya, which features photographs by Alexander and words by Alex Van Tol, follows Takaya as he goes about his day, giving readers a tour of his lush colourful home and the flora and fauna within it. Almost every page features an animal that Takaya sees, and the rhyming text identifies the animal and a prominent colour in that scene. The text of the colour words is capitalized, and the colour that the text refers to is reproduced (e.g. the word “ORANGE” is the colour orange).

The photographs are the star of this book, offering beautiful scenes of the lush British Columbia coast. The animals and plants featured range from the more everyday (seagulls, otters) to the more unfamiliar (murrelet, camas), and the colours also run the gamut from the usual primary suspects to gold, copper, and “rosy”. The text is written from the perspective of the photographer who is watching Takaya. Lines like “I see you Takaya” show a passive observer following this wolf throughout one day.

As there is no author/photographer’s note providing context about Takaya, readers could pick up Good Morning, Takaya and never know his amazing story, an omission which seems a lost opportunity for education. In March 2020, Takaya was killed by a hunter. This book and the others in the series carry Takaya’s legacy, and it is some comfort that Alexander was able to capture so much of this unique animal’s life.

Toby Cygman is a librarian in Winnipeg, Manitoba.