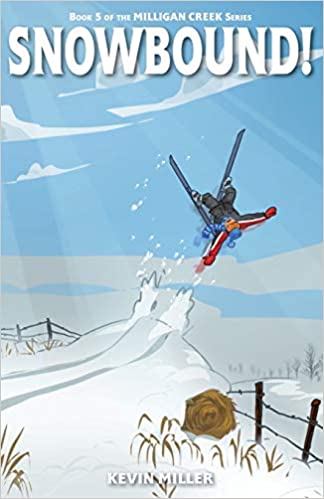 Earl was losing his patience. Not only had that dimwit Dewey gone missing with his precious cargo, now Clive, Earl’s most trusted employee, had disappeared too. Over twenty-four hours had passed, and not a peep from the AWOL Englishman. It was starting to feel like a horror movie, with one person disappearing after the next. Earl could only imagine what would happen if he sent someone else looking for Clive and another buffoon looking for that person and so on and so on. Pretty soon his entire organization would be missing, and Earl would be left all alone in his office with no one to do his dirty work - or make his tea. Speaking of which ...

Snowbound! continues the story of the tiny Canadian prairie town of Milligan Creek and the ongoing adventures of brothers Chad and Matt and their friends Dean and Andrew. Thanks to another well-written and suspenseful opening chapter that introduces a new but sure-to-be beloved secondary character, this new entry offers readers exactly what they’ve come to expect from this middle-grade series: a fast-paced adventure including lots of laughter.

In this fifth installment of the “Milligan Creek” series, a record snowfall gives the group of friends an idea of building a snow maze so great they could charge admission. Meanwhile, a hapless criminal named Dewey Biggs finds himself stranded in town. Struggling with amnesia following a car accident, he's unable to remember where he buried an important item just prior to the collision, and, if he doesn't find it, there's no telling what his boss will do to him. With the group of brothers and friends hunting for the perfect snow maze location and Dewey searching for his treasure, it's only a matter of time before the two forces collide, right in time for Valentine's Day!

Author Kevin Miller continues to display an authentic voice within Canadian middle-grade fiction and a knack for tapping into the social-emotional framework of adolescent males. The relationships between both the brothers and friends in the main character group readily straddle the dual lanes of male middle-school friendship: genuine care with a dose of well-intended teasing. Although readers are sure to enjoy following Matt, Chad, Dean, and Andrew on yet another epic adventure, the novel’s best parts are those featuring new character Dewey Biggs as he slowly puts together memories revealing his purpose in Milligan Creek and the valuable item he left buried deep in the snow. Secondary characters of this subplot line also shine thanks to head-honcho Earl Jones and his right-hand man Clive offering just as many hijinks as the original four boys.

Continuing to appeal mostly to hesitant young male readers, this winter-themed entry overflowing with all things snow-related offers yet another smooth and satisfying read in the ongoing series. At just over 200 pages, readers are certain to gobble up Snowbound!, this action-packed novel, and be left with eager anticipation for the next “Milligan Creek” escapade.

Amy Westbury is a teacher-librarian at Abbey Lane Public School in Oakville, Ontario.