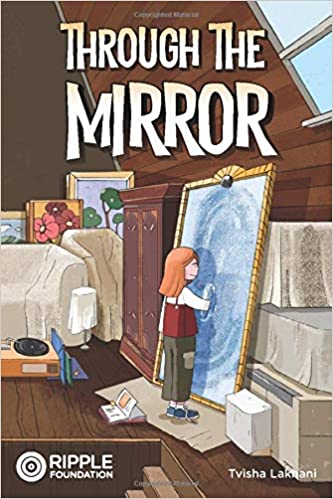 Like the time I accidentally broke my mother’s favourite vase (it wasn’t my fault that it was lying on the kitchen table when I was throwing a baseball around my house … even though I wasn’t allowed to). Or the time I broke my neighbour's window when I was playing cricket but hit the ball too high. Or the time I fell through a mirror and into another world and got framed for stealing something I didn’t.

Tvisha Lakhani is a Grade 7 student in Brampton, Ontario, with a love of writing and a talent for writing. Her adventure novel was a co-winner in a contest run by The Ripple Foundation, a charitable foundation devoted to fostering creativity in young people across Canada.

Lakhani’s protagonist is feisty 12-year-old Nicole Leblanc who stumbles across action and mystery in the most mundane places, like a dusty attic. An old mirror turns out to be a portal into an ancient world where she is promptly arrested and charged with stealing a valuable bracelet.

Nicole’s fast-paced journey to clear her name is exciting and fun-filled and will keep early independent readers turning the pages to discover the identity of the true thief. Nicole is accompanied on her search by an equally bold and opinionated princess, Rosalyn, who is the antithesis of the whiny, helpless stereotype. The clever girls set a trap and capture a thief, Roger, who trash talks royalty despite his lowly origins.
Lakhani’s story is set in a medieval kingdom, but she knows how to appeal to modern children's sensibilities by peppering the character’s conversations with insults and jabs between Rosalyn and Roger.

Rosalyn stepped towards the boy threateningly. “You will take us to this hidden entrance without trying anything funny, or else face my wrath, Masked Thief,” she said. Wow, talk about melodrama.

“Whatever. And I have a name other than Masked Thief, you know,” he said. “And it’s Roger.”

Rosalyn rolled her eyes. Roger glowered. I could clearly see the instant hatred between them. I stepped in.

A cell phone in Nicole’s pocket turns out to be a handy gadget, and, being children, of course, the other two kids learn how to use it quickly to solve the crime.

Lakhani’s plot has twists, turns and unexpected developments that lead to a just conclusion. Within that, the reader learns that Roger is a sympathetic character who belies his tough exterior.

The proceeds from the sales of this book will be donated to a charity of Lakhani’s choice. Founded in 2012, The Ripple Foundation holds writing workshops for aspiring young writers and runs contests to encourage their initiative, among other programs aimed at youth development.

Lakhani’s jaunty, humour-filled writing (with a very good play on the word ‘duck’) shows promise. The recognition she receives from winning this contest is a vote of confidence in her talent and abilities and should encourage her to hone her skills. Congratulations to this teen writer whose enjoyable story will entertain young readers and, in doing so, will inspire them to read - and perhaps write as well.

Harriet Zaidman is a children's writer and reviewer in Winnipeg, Manitoba. Working with aspiring young writers was one of the most enjoyable parts of her job as a teacher-librarian for 25 years.