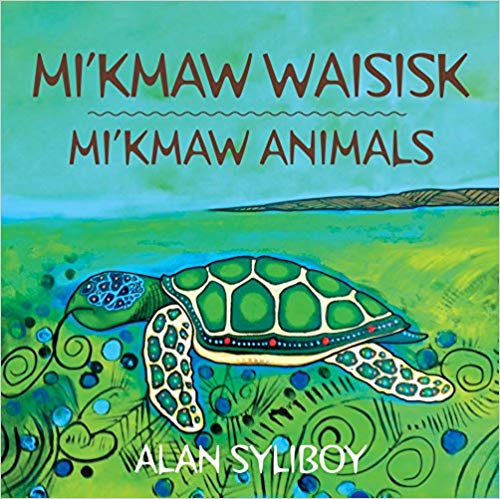 Alan Syliboy, a Mi’kmaw artist and storyteller and creator of the picture book The Thundermaker, (https://www.umanitoba.ca/cm/vol22/no21/thethundermaker.html) has now created a board book, Mi’kmaw Waisisk = Mi’kmaw Animals, which, as the title indicates, is bilingual.

With the exception of the last pair of pages, each page pairing introduces a single animal with Syliboy’s illustration appearing on one page and the bilingual text on the other. As can be seen in the excerpt, the Mi’kmaw term for each animal appears first, followed by a guide to its pronunciation, and then the English term. In their English rendering, the board book’s nine creatures are: beaver, caribou, humpback whale, butterfly, horse, moose, eel, crane and turtle, with the last two sharing the closing illustration. Though some of these animal words in English might be met in other board books, others will certainly be new to the book’s intended audience.

In addressing the book’s illustrations, accompanying promotional materials explain that “Alan [Syliboy] looks to the indigenous Mi’kmaw petroglyph tradition for inspiration and develops his own artistic vocabulary out of those forms.” His illustrations are certainly eye-catching, but they may not be entirely suitable for a board book’s young audience. While some, such as that of the humpback whale, the eel and the turtle, are quite representational, others, like those of the beaver, caribou and butterfly, demand more of the viewer.

Books like Mi’kmaw Waisisk = Mi’kmaw Animals play an important role in the reconciliation process, and its purchase should not just be limited to those areas of Canada where Mi’kmaw was once used as a first language.