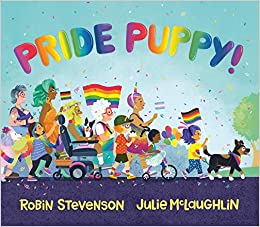 A is for awake, animals and all.

B is for breakfast and baby and ball.

C is for car, our old Chevrolet.

D is for dog, dressed up for the day.

Pride Puppy! begins with a family getting ready for Pride, starting their day with rainbow pancakes, getting dressed in all of their festive rainbow gear. Their dog has on a lovely rainbow bandana, one big ear sticking straight up and the other flopping over. It’s going to be a fantastic day, and everyone is in the mood to celebrate, including the excitable puppy that inevitably gets loose to run amok through the festivities. As the puppy runs through the parade and other events of the day, readers witness all sorts of fun and frivolity, from people dancing, to colourful parade floats, to drag queens and dancing and singing. Along the way, the family searches high and low for their puppy, but the puppy is much more interested in the sights and smells all around than getting back on a leash.

As readers work their way through Stevenson’s alphabetical rhymes, each line pointing out certain features on its corresponding page, the story is expanded upon through McLaughlin’s vibrant illustrations. There are flags and feathers and cats and dogs, and a beautifully inclusive cast of characters. On one page, a person’s sign proclaims, “The Future is Intersectional”, and representation throughout the book confirms the sentiment. There are BIPOC individuals on every page, as well as people with disabilities, people of all different genders and sexualities, kids and adults and seniors, and people from different religious backgrounds. And of course, on every spread, people are reacting to the aftermath of the rambunctious puppy’s antics.

What appears at first glance to be a rather simple concept, in the hands of Stevenson and McLaughlin becomes a rich and story of diversity and inclusion focused around a curious and energetic puppy who just wants to experience everything. Curious children will be able to engage in a word search as well, with a word list included in the back of the book. A feast for the senses, Pride Puppy! will be sure to capture the attention of young readers and parents alike.

Rob Bittner has a PhD in Gender, Sexuality, and Women’s Studies (Simon Fraser University), and is also a graduate of the MA in Children’s Literature program at the University of British Columbia in Vancouver, British Columbia. He loves reading a wide range of literature, but particularly stories with diverse depictions of gender and sexuality.