How Hope Became an Activist 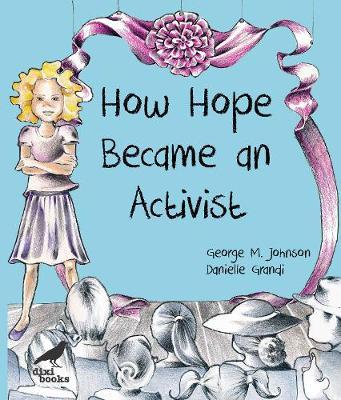 How Hope Became an Activist

Mom came up to me and said, I’m so proud of you. Now, I guess you know what it means to be an activist.”

“You mean, getting everybody active to do something good?”

“I know we are small but it feels like we are creating something bigger than us. Our actions might help kids we don’t even know. Plus, I’ve made friends being an activist.”

“You have, and now you’re part of a community of people with positive energy. One activist, Martin Luther King Jr. said that injustice anywhere is a threat to justice everywhere because we are all woven together like a single piece of clothing.”

No one is too small to make a difference and inspire others. When Hope’s mother approaches her with the idea of taking part in an ‘activist play’, Hope isn’t sure what that means. When she finds out the play is to raise awareness about child labour, Hope knows she needs to be part of the play. She learns more about child labour, including how the girls who work in factories aren’t able to go to school, are paid very little, and aren’t allowed to talk. Hope finds parts of the play scary, such as when the factory manager yells at the girls to work faster, but the resulting awareness raised with her friends and her community makes the parts that scare her worth it.

In How Hope Became an Activist, readers learn how identifying where your clothing was made can make a big difference in the lives of children and adults working in sweat shops around the globe, and how speaking out about injustices, like child labour and unpaid labour, can make a difference in the lives of people you’ve never met, and how taking a stand can make you feel good.

Illustrator Danielle Grandi uses colour to emphasize the differences between Hope’s life and that of the girls working in sweatshops, with Hope’s life being portrayed in full colour while the images depicting child labour are rendered in grey. With the background being kept simple throughout, readers’ eyes remain focused on people, just like Hope and her activist play.

While the depiction of children working in factories, unable to go to school or play, may be upsetting to some young readers, the message that a person, no matter how small, can make a difference is important to share. Readers will learn that, while something may be scary, speaking out can make a big difference no matter your age. By Hope’s getting on stage even when she is nervous in front of a crowd, and learning about child labour even though it scares her and makes her feel sad for the young girls who are working in factories while she plays and goes to school, the aptly named Hope shows that no one is too small to make a difference and that even a small action can make a big difference. The message that rising awareness however you can is never a waste of time will never go out of fashion!

Crystal Sutherland (MLIS, MEd Literacy) is the librarian at the Nova Scotia Advisory Council on the Status of Women in Halifax, Nova Scotia.