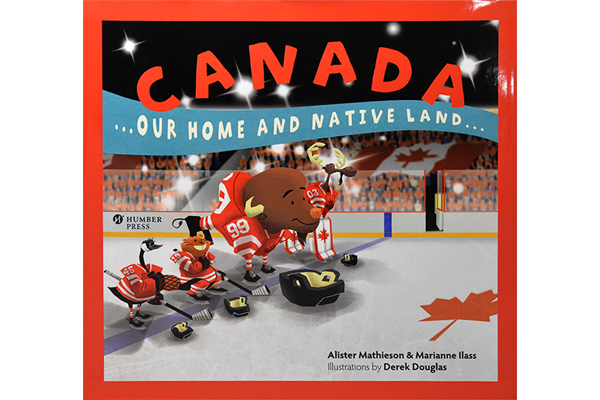 J is for July 1st

July 1st is Canada Day and our country’s birthday. On that day in 1867, the British North American [sic] Act (BNA Act) was officially signed, signalling the birth of a nation. This Act saw the formation of a new government, under British rule, uniting the four provinces of Nova Scotia, New Brunswick, Ontario and Quebec (then called Upper and Lower Canada) to become the Dominion of Canada. This important milestone in Canadian history is known as Confederation. The Fathers of Confederation realized that by joining the provinces and having just one government, they needed a set of rules with which to govern them. This was known as the Constitution. There were twenty-nine Fathers of Confederation, but the most famous was Canada’s first prime minister, Sir John A. Macdonald.

Canada: Our Home and Native Land is a companion volume to the creative team’s Canada: Our Road to Democracy. ( www.cmreviews.ca/node/1944 ) It is structured in an alphabet book format and features the same iconic mascots, Bo the Bison, Bernie the Beaver, Gabrielle the Canada Goose, and Miki the Moose. The mascots appear at the beginning of each entry and engage in humorous dialogue and pose a question or a suggested educational activity at the end of each entry. They also feature prominently in the illustrations. The first edition of Canada: Our Home and Native Land appeared in 2015. It is unclear what, if any, changes have been made in the 2019 edition apart from the publisher changing from Humber Press to Blossom Books.

Entries emphasize geography, history, and cultural aspects of Canada. This is not surprising given that Alister Mathieson, the first named author, trained as a geographer, co-authored a text on tourism, and recently retired from a senior administrative role with a college in Ontario. He is the author or co-author of all of the books published by Blossom Books.

As demonstrated by the excerpt above, the creators cram the volume with facts. They strive to promote nationalistic pride in country and heritage and strive to celebrate Canada’s diversity. By overlooking the effects of colonialism on Indigenous peoples, prejudice, discrimination and other shortcomings of Canadian society, they follow an out of date narrative about the wonders of Canada, its settlement by Europeans and more recent waves of immigrants. They largely portray Indigenous peoples as historic beings despite noting their presence in modern society.

Particularly troublesome are the illustrations and entries for “I is for Inuit,” and ‘’F is for First Nations.” The Inuit are shown inside an iglu, illuminated by cooking apparatus fueled by animal oil while, outside, the iglu and its neighbours are lit by the spectacular northern lights. The accompanying text emphasizes traditional ways of life and may lead readers to believe that Inuit still live in iglus. The stereotypical depiction with no clear explanation that this is an historical representation rather than a modern one is unacceptable. Likewise, the overly ambitious image of First Nations tries to represent diverse Nations in pre-contact times spanning the west coast (represented by totem poles and a figure spearing salmon), the prairies (represented by tipis and a buckskin clad warrior/hunter sporting face paint on horseback) the woodland culture of the present day Ontario (represented by two women tending corn and other crops) and in the foreground, a male figure wearing a feather headdress and face paint engaged in a ceremonial or perhaps war dance. The text for the entry focuses on the traditional but acknowledges that there are more than one and a half million First Nations, Inuit and Métis people in Canada today. The illustration, imbued with stereotypical iconography, again implies that Indigenous cultures are extinct. These kinds of images without better explanation are offensive. Words highlighted in the text appear in a glossary, where some definitions are rather unhelpful. Take this example:

Some of the illustrations are quite breathtaking, notably the double page spread for “S is for Scenery” that features a scene some may recognize as the Hopewell Rocks, also known as The Flowerpots, at low tide in New Brunswick. The image represents the Bay of Fundy, one of the Seven Wonders of Canada that is featured in the text. The colours are striking, and the people depicted include a Sikh father and child as well as a Caucasian man. The four animal mascots are also shown, along with several cartoonish sea creatures left behind when the tide receded. Other images include ethnically diverse and differently abled Canadians. Depictions of Canada’s national sports, ice hockey and lacrosse, portray only male figures if one excludes the mascot Gabrielle. The accompanying text fails to acknowledge that women and girls enjoy playing sports, too, and that the Clarkson Cup is awarded for women’s hockey, much as the Stanley Cup is awarded in men’s hockey.

The text is marred by numerous errors and inattention to factual details. In the excerpt above, July 1st is misidentified as the date the British North America Act was signed when, in fact, it is the date that the law came into effect. The Act is misnamed, and the reference to one government is unclear as there is one national or federal government, but the provinces, of course, retained jurisdiction over many affairs and set up their own legislative assemblies. Under “N is for Niagara Falls,” the authors claim that hydroelectric power is the main source of power for Ontario when, sadly, the truth is that nuclear power remains, at almost sixty percent, by far the most important source of electricity in Canada’s most populous province. Niagara Falls may be the largest single source of hydroelectric power, but that is not what the text says. In the discussion of whales, the authors lazily state that whale bones “were used for fishing rods, umbrellas, carriage wheels and skirt hoops” when they really meant to say baleen, the keratinous material from krill feeding whales. The entry for Quebec, the province, claims that the main industries of the province are “electric power, pulp and paper, mining and agriculture” and fails to recognize the important role of manufacturing industries.

More careful use of words would state that the novel Anne of Green Gables was published, rather than “written” in 1908. When stating the percentage of Canada’s population that is made up of immigrants, they do not use the most recent figures disseminated by Statistics Canada based on the 2016 Census. This reviewer may be nitpicking, but careless writing detracts from the work as a whole.

Readers may enjoy the added reference lists at the end of Canada: Our Home and Native Land. There are two pages of Canadian inventions listed alphabetically and include a year, name of creator/inventor and general facts, a list of provinces and territories with their official symbols (flower, tree, bird, animal) and capital cities, bibliographical resources including many government websites, the text of the national anthem in both official languages, and the text of John McCrae’s poem “In Flanders Fields”.

Val Ken Lem is a librarian at Ryerson University. He qualified as an elementary school educator in Ontario before pursuing a career in librarianship.