The Ship of Fortune 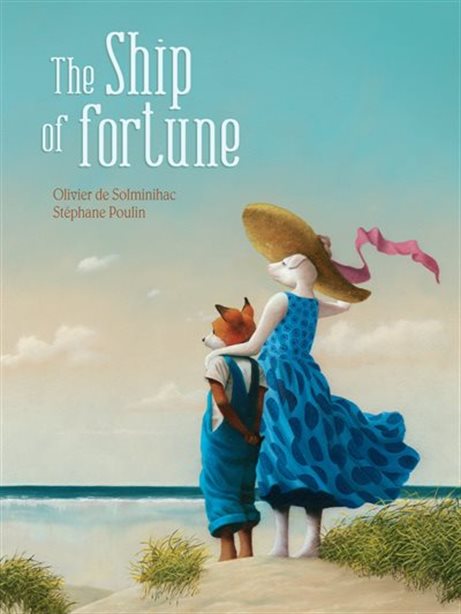 The Ship of Fortune

How do you make something from nothing? With your imagination! That’s the delightful message Olivier de Solminihac delivers in the English translation of his inspiring picture book, The Ship of Fortune. Originally published in French in 2014, the playful text is brought to life beautifully through the appealing and skillfully-wrought paintings by Canadian multi-award-winning artist, Stéphane Poulin.

The day at the beach for the children - a fox (the narrator) and a goat (Marguerite) - becomes a disaster right away because their guardian, Michao (uncle, friend?) has forgotten the towels, bathing suits, the buckets, shovels, the beach ball and the inflatable crocodile. The trunk is empty!

When a magic spell fails to turn up the missing materials, the kids despair. The fox says, “What now? We can’t play ball. We don’t have buckets for a sandcastle. I don’t know what to do!”

Michao, an affable-looking bear in sandals and loose fitting summer clothes, sits down in the sun to have a think. “We can build a boat,” he says at last. And the fun begins. The kids hunt down pieces of wood, seaweed and shells while Machao snoozes on the sand. When he’s needed, he helps them arrange the planks for the raft, twist the seaweed around to hold them together and decorate the vessel with the shells.

Before they realize it, the sun is setting. They launch their boat into the sea.

“Where is it going?” asks Marguerite.

Michao points to the horizon. “You have to imagine”

Olivier de Solminihac has written more than a dozen books for children and is also the author of adult novels and poetry. This whimsical tale is perfect anytime to inspire children to use their imaginations. It’s even more appropriate for Covid-times when excitement about the lockdown became old quickly. Olivier de Solminihac co-founded a literary magazine and works in publishing. This is the second book featuring the three characters of different species, with no explanation offered, given, nor needed, because family groupings are made up of all sorts of people.

Montrealer Stéphane Poulin’s vivid acrylic paintings show the beauty of a seaside beach. The sun is bright on this summer day, the sea beyond is vast and blue, the whitecaps inviting. The characters are intriguing, Poulin’s representation of their feelings subtle. While the fox/boy is shown, Marguerite’s face is often hidden by her wide-brimmed hat. Yet, there is no mistaking her sadness at the thought of the missing beach stuff. Machao is a big bruin, a reliable guardian (except for the things he forgets).

Poulin’s art and writing are well-known to Canadians. He’s been recognized internationally for his illustrations since he began illustrating in 1985. In Canada, he has been awarded the Governor General’s Literary Award for Illustration for Benjamin and the Pillow Saga (www.umanitoba.ca/cm/cmarchive/vol18no1/benpillow.html ) and Snake Hair, Spider Tooth (1997). He has also written Have You Seen Josephine (1989) and Benjamin and the Pillow Saga ( www.umanitoba.ca/cm/cmarchive/vol18no1/benpillow.html ) to much acclaim, but reportedly he prefers illustrating to writing.

Like Rembrandt’s 1633 etching, “The Ship of Fortune”, we can choose our adventures. De Solminihac has captured the essence of that lesson in this happy tale brought to life on the page by Stéphan Poulin’s beautiful interpretations.

Harriet Zaidman is a children’s and freelance writer and book reviewer in Winnipeg, Manitoba.