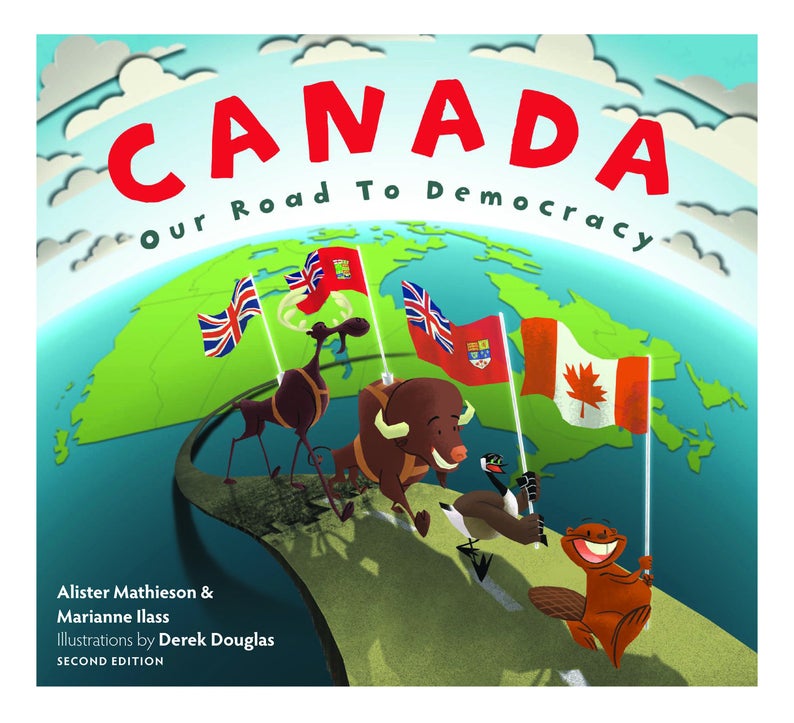 The way we run Canada is called a Representative Democracy. This means that citizens can freely vote in elections and elect people to represent them in government.

Canadian students need books about Canada, and this attractive book is very appealing at first glance. I am organizing this review into: Three Stars, for things I like about the book, Three Wishes, for things I wish were a little better, and Three Errors or Omissions. You can decide if this book is what you are looking for in terms of your young readers.

1. Illustrator, Derek Douglas, has created some colourful and eye-catching illustrations to go along with each topic. Topics are arranged alphabetically around the theme of the history of Canada as a democracy.

2. The illustrations depict a diversity of skin tones and includes one person in a wheelchair and “Y is for Youth”, featuring Terry Fox who attempted to run across Canada on one leg.

Equality – means that everyone is equal under the law irrespective of their race, religion, ethnic origin, gender, age or if they have a mental or physical disability.

3. The visual hunt for a maple leaf hidden in each of the illustrations is sure to engage the young readers.

Somewhere in every illustration on each alphabet page we’ve hidden a red or white maple leaf – some have several. How many can you find?

The very last words on the end page tells you how many are hidden.

There are 68 red or white maple leafs (sic) hidden throughout this book. Did you find them all?

1. I wish there were more women in the illustrations. There are four animal characters that introduce each topic and even they seem to be three males and one female. Excluding the pages that portray historical figures, like the Fathers of Confederation and the Prime Ministers, and, also excluding figures that are too small or androgynously dressed, there are 35 males and 16 females illustrated. A more equitable balance would have been easy to achieve, for example, by replacing the white square-chinned Mountie with a female Mountie instead.

2. I wish that the history of the First Nations, Métis, and Inuit people could have been included more accurately and fully. To me, what makes this book most problematic is the dated and incomplete reference to the role of Canada’s first Prime Minister, Sir John A. Macdonald, towards the First Nation’s people.

He was one of the Founding Fathers of Confederation, developed a coast-to-coast national railway, and united the French and English settlers with Canada’s Aboriginal Peoples.

Also, I expect that both the FNIM people and the French Canadians will be surprised to read that “Canada began as a British Colony, ruled by whichever king or queen occupied the throne in England.” That is not an accurate portrayal of how Canada “began”.

3. I wish that in “F is for Freedoms”, the authors had chosen to include mention that the guaranteed rights and freedoms in the Canadian Charter of Rights and Freedoms are limited by the government’s power to apply reasonable limits to hate speech, obscenity, and defamation. No matter how young the reader, it is important to make the connection between rights and responsibilities.

3. The English version of “O Canada” that is included at the back of the book uses the more inclusive words “in all of us command” as adopted by legislation on January 31, 2018. This version of the anthem is incorrectly attributed to Mr. Justice Robert Stanley Weir who wrote the earlier version which was Canada’s official anthem beginning in 1980.

Although I can only recommend this book with reservations, one feature that may influence your decision to purchase Canada: Our Road to Democracy is that “All net proceeds from the sale of this book are being donated to awards and scholarships for College students in financial need, with disabilities and mental health challenges.”

Dr. Suzanne Pierson is enjoying staycationing at home in Prince Edward County, Ontario, where she tends her Little Free Library for the enjoyment of her stay-at-home neighbours.