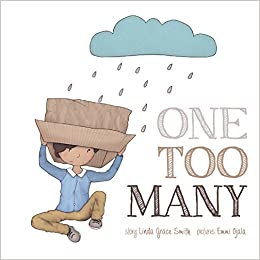 A small British Columbia publisher has provided readers with this gentle little lesson about the importance of social equity. Its repetitive text has the cadence of a chant and is set out like a poem, one verse to a page, in a large typeface with the look of hand lettering.

The text immediately invites the reader to make connections regarding the lot of others in different and more difficult circumstances. The opening lines set the tone:

No one is free
If even one is oppressed.
And has basic rights
That are left unaddressed.
As long as there’s one
Who hasn’t a floor,
A roof and four walls
With a window and door,
There’s one too many.

Illness, poverty, discrimination: if there is even a single child who faces one of these with no help to turn to, it is “one too many”. The downcast expressions on the faces of the figures of children in various circumstances and costumes support the seriousness of the verse.

But half way through, readers are presented with a formula for change.

But when one turns toward
Instead of away,
The math turns around
In a powerful way.
As long as there’s one
Who welcomes a guest
With a warm place to sit
And a safe place to rest,
One turns to two.

Two becomes, three, then four, five, and six. And the facial expressions change from sadness to pleasure.

The last stanzas are accompanied by a picture of a group of children holding hands and dancing (to the music of a boom box on someone’s shoulder!). Even a teddy bear and stuffed rabbit are stepping out together to the beat.

When one turns to two,
And three turns to four,
The load is not held by just one any more.
It takes only one
Who addresses a need,
Until, one by one,
Everyone has been freed.

It is satisfying for children to think that, even singly, they can affect change, although realistically some of the issues here are more complicated than one person can deal with. There is no information about the author in the book or from the publisher, but a note from Linda Grace Smith at the end states that she was inspired to write this by personal reading and observation and by the United Nations Convention on the Rights of Children. Peppermint Toast’s website indicates that “10% of the proceeds from the sale of One Too Many are going to [unspecified] children’s justice initiatives”.

As a conversation-starter for teachers and parents, One Too Many will find a place in many library collections.