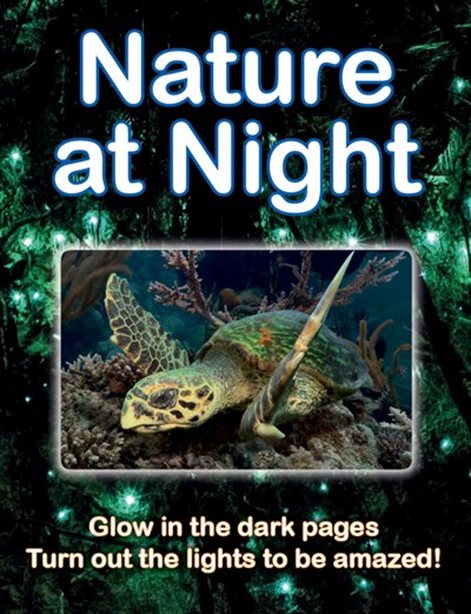 These insects are found only in New Zealand and Australia and, although they are called glowworms, they are actually a type of gnat (say it: nat), In their young, wingless stage they produce bioluminescent light to attract their prey.

These young larvae (say it: lar-vee) shelter in caves and make long silken threads to hang down from the cave roof as traps. Each thread has drops of mucus, sometimes poisonous, to catch passing moths and flies. A hungry glowworm is brighter than one that has eaten.

A cover holograph of a swimming sea turtle invites readers to enter the pages of Regan’s Nature at Night as the cover’s text simultaneously promises: “Glow in the dark pages[.] Turn out the lights to be amazed!” In all, Regan offers readers 23 examples from nature of things that, because of bioluminescence, biofluorescence or being exposed to ultraviolet light, glow in the dark. With the exception of the book’s single-page closing example, each of the other 22 “glowing” examples is treated via a double page-spread which contains a full-colour photo of the creature and brief text.

On the book’s opening “Contents” page, readers are instructed:

When you see a [page number inside a yellow star], hold the book under a light source for thirty seconds. Then turn off the lights to see the pages glow!

Regan begins by defining the terms “bioluminescence”, “biofluorescence” and “ultraviolet light” before noting that text words highlighted in yellow print will be defined in a closing glossary. All of the spreads contain two or more excellent colour photos that are supported by both captions and brief explanatory text. The latter usually explains the role that the “glowing” plays in a creature’s life, such as for camouflage, attracting a mate or prey, or discouraging predators. For example, the caption beneath the photo of a bioluminescent Eye-Flash Squid reads: “The dots are arranged in rows with some larger ones and lots of smaller ones.” The accompanying longer text then explains the dots and their purpose.

This creature is tiny–shorter than your thumb–but quite amazing. It gets its name from lights underneath its eyes, but it also has around 550 tiny bioluminescent dots all over its body. These flash in different patterns to thoroughly confuse its enemies.

As the text in the “Excerpt” demonstrates (“These young larvae (say it: lar-vee) shelter in caves...”), Regan provides a helpful internal guide to the pronunciation of some of the book’s “technical” terms.

The ocean is the natural habitat of a little over a third of the book’s “glowers”, and so most of the book’s readers will likely never have a personal experience with the biofluorescence of a Fimbriated Moray Eel or the bioluminescence of a Flashlight Fish or the opportunity to bathe a Lizardfish in ultraviolet light. However, some Canadian children might be fortunate enough to see the bioluminescence of Fireflies, aka Lightning Bugs, or encounter eerily glowing wood on a forest floor, the light being produced by bioluminescent fungi. And almost everyone has seen the biofluorescence of the Northern Lights.

Nine of the book’s 23 entries are treated via the glow-in-the-dark pages, and this reviewer tested them all, with the biofluorescent results being quite impressive.

Nature at Night is an informative and fun introduction to some of the strange glowing wonders of the world. Readers who enjoyed this book could be directed to Regan’s Glow Down Deep: Amazing Creatures That Light Up.