There’s a Norseman in the Classroom! 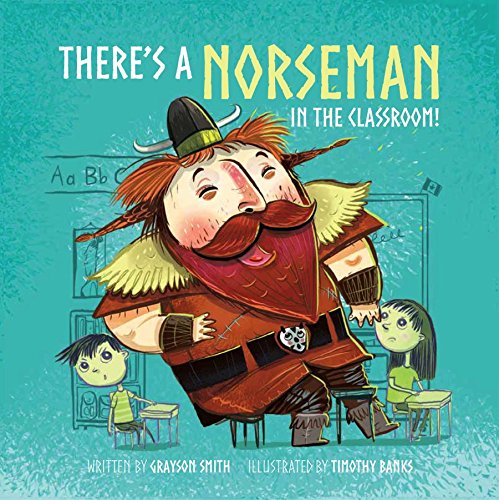 There’s a Norseman in the Classroom!

The Norseman named Norm is TOO BIG

for the desk and chair!

Nobody can see over his HUGE HAIRY SHOULDERS!

his LAUGH IS SO LOUD that the children

have to cover their ears.

The beginning of a new school year brings lots of joy and excitement. After nine weeks of holidays, the children are eager to reunite and begin the second grade. They especially look forward to meeting their teacher, Mrs. Whallomp, after hearing good stories about her kind ways. Everything is going smoothly on that first day of school until a new student enters the classroom; he is a large, loud, fearsome creature named Norm. Norm is a Norseman, and everything about him is grand: his size is too large for the desks and chairs; his laugh is so loud that children cover their ears; his fingers are so clumsy that his art projects turn into a mess.

It soon becomes evident to both Norm and Mrs. Whallomp that the children are not accepting of Norm’s differences. The students feel that Norm is ruining their school year, and they tell him not to come back to the classroom. Norm’s feelings are hurt as he walks home alone from school. Mrs. Whallomp points out to the children that Norm is a child, just like them. When Norm does not return to school the next day, the children and Mrs. Whallomp feel a void in the room. Mrs. Whallomp could use Norm’s help to hang something high on the wall, and, when a funny story is shared, the room seems too quiet. Everybody misses Norm and wishes that he would come back. The children write Norm a letter requesting his return to the classroom. The next day, Norm returns, and the children apologize. They cheer as he is able to hang the clock high on the wall for Mrs. Whallomp (a job that only he could do so well), laugh as hard as he does at the next funny story, and take turns helping Norm with his school work.

Through having Norm as a classmate, the other children learn more than what is taught by Mrs. Whallomp. They learn multiple important life lessons which translate to themes in the story. There’s a Norseman in the Classroom! can be used to teach and/or learn about acceptance, diversity, inclusion, kindness, forgiveness, citizenship, and more. The full-page, coloured illustrations demonstrate the emotions of sadness both in Norm and the other children’s faces when Norm is being excluded. In contrast, everyone is even more joyful than the first day of school once Norm returns to class and they all get along. Cultural diversity is evident among the children (as evidenced through the differing skin colours, eye colours, and hair colours), but Norm is diverse in his size, shape, and language. Norm’s “Student Profile” and additional information to understand Norsemen are included near the end of the book. Details are included to describe the background, language, occupation, and accomplishments of these unique northern men. Norm’s differences are portrayed as a strength in this story as he is able to do some things the other children cannot do, just as the other children have their own strengths that they are able to demonstrate in the classroom.

In addition to being used as a tool to discuss these themes, There’s a Norseman in the Classroom! could also be used as an introductory text to teaching and learning about personal identities. After understanding more about Norsemen, teachers or parents may wish to teach children about their own family heritage or cultural background. The many ways that this story can be used makes it a highly recommended addition to any home, classroom, and school library. While this picture book has a simple, easy-to-follow storyline, it can be a tool to teach multiple important, complex topics.

There’s a Norseman in the Classroom! is published by Peppermint Toast Publishing, a British Columbia-based independent small press whose goal is to showcase the creative talent of new and experienced authors and illustrators in partnership with local non-profit and charitable organizations. From the purchase of this children’s picture book, $2 will be donated to Special Olympics British Columbia to help change lives through the power of sport.

Information on the dust jacket explains that the author, Grayson Smith, is a police officer who began writing stories at an early age. He uses writing “to express the silliness and vagary that simmers beneath his well-practiced outer layer of respectability and professionalism.”

According to the dust jacket, Timothy Banks “is an American illustrator with southern roots and questionable Norse heritage.” An experienced children’s book illustrator, he “enjoys creating characters with both sweet and menacing personalities.” More information on Banks can be found on his website: timothybanks.com

Andrea Boyd is an early years’ teacher in Winnipeg, Manitoba. She is currently pursuing her Master of Education degree specializing in Language and Literature at the University of Manitoba.