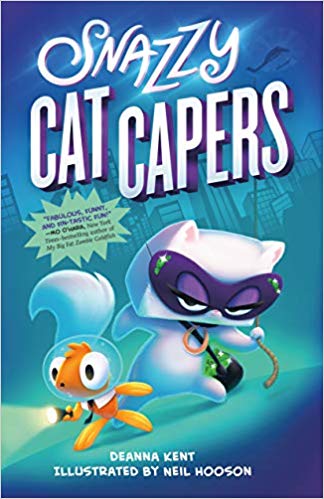 Crime Magazine, the National Scratching Post, and Vanity Fur call her “the mysterious solo cat burglar who’s taking the world by storm with style and sass.” An elite member of the Furry Feline Burglary Institute, Ophelia is a thief extraordinaire who follows a timeless, honorable code to keep cat burglary classy. Everyone asks me what she’s really like behind the mask. Thin of a fluffy James Bond with a love for diamonds, disguises, and double dares.

As the story begins, Ophelia Von Hairball, a cat burglar, is at a fancy masquerade ball where she hopes to steal a fabulous tiara. As a member of the FFBI (Furry Feline Burglary Institute) governing cat burglars throughout the world, Ophelia participates in challenges to keep up her skills. Her cousin and archrival, Pierre, is very jealous of her success and will do anything to prevent her from taking part in the FFBI’s Fifth Annual Purr-fect Heist Competition. When a fish inventor named Oscar Fishgerald Gold arrives to help Ophelia, she turns him away, stating that she works best alone. However, Gold’s inventive mind and eager assistance soon start coming in very handy!

Ophelia’s journey to the Purr-fect Heist Competition is full of danger, but she is determined to beat her dastardly cousin Pierre at his own game. “She was prepared to win at any cost, because there was absolutely no way that she would allow her cousin to knock her from the number-one spot at the FFBI.” (p. 50) Her travels are full of amazing gadgets, exciting escapes, and creative solutions. There are numerous humorous situations, including landing on a garbage barge and disguising herself as a “radical biker cat.”

Snazzy Cat Capers is the first book in the “Snazzy Cat Capers” series by Deanna Kent. At first, readers might wonder why they are reading a book about a thief – a cat burglar. Aren’t burglars criminals? However, the premise in this book is that cat burglars are skilled professionals who enjoy the chase. “It was an unwritten rule that the classiest cat burglars didn’t keep the priceless objects they pilfered… For a good cat burglar, it was all about the chase.” (p. 12).

This chapter book for young readers is full of references to famous crime-fighting organizations, such as the FBI and the CIA, which, in this story, become the FFBI – the Furry Feline Burglary Institute – and the CCIA – the Canine Central Intelligence Agency. These organizations are run and operated by cats and dogs. Ophelia may be a cat burglar, but she is an amusing and very “human” heroine. She has many flaws, such as arrogance, pride and vanity, but she is also brave, intelligent and adventurous!

The black and white graphic features of the text are full of action and interesting detail which add to the storyline. At times, the story is told in cartoon-like panels, sometimes without any text. There are also illustrations scattered throughout the text which illustrate the action going on in the story. The book is a combination of the traditional and graphic novel formats. The characters are animals – cats, dogs and even fish – but their vivid facial expressions provide readers with a lot of information about how they feel about various events. The quotations by Ophelia at the beginning of each chapter are both amusing and insightful and provide comic twists on famous sayings such as, “They say good things come to those who wait. But who likes waiting?” or “There are only three things you really need in life: a big dream, a terrific plan, and a fabulous shoe collection.”

Ophelia’s adventures are exciting and amusing. Snazzy Cat Capers examines the virtues of imagination, hard work, co-operation and friendship. Readers should look forward to more books in this series.

Myra Junyk is a Toronto-based literacy advocate and author.