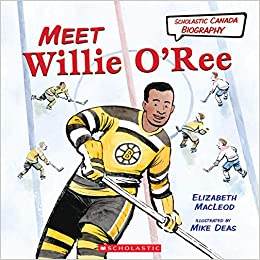 In January 1958, Willie got the call he’d been waiting for all his life. The Boston Bruins wanted him to play for them. Willie would be the first black player in the NHL.

Willie knew he was just filling in for an injured player. He played one game in Montreal and one in Boston. Then he had to return to the Aces.

Now getting back into the NHL became Willie’s goal.

Meet Willie O’Ree is the story of Willie O’Ree and how he became the first black player in the National Hockey League.

Wille O’Ree was born in Fredericton, New Brunswick in 1935. He was good at baseball and hockey and became the first black player in baseball’s minor leagues with Montreal in 1946. A year later, Jackie Robinson became the first black player in the major leagues, and it looked like Willie O’Ree would follow in his footsteps. Willie got a tryout with a US minor league team but had to go to training camp in the US “Deep South” where there was a lot of racism. Willie faced a lot of adversary and was happy to focus on his favourite sport, hockey, when baseball didn’t work out. In 1952, Willie started working his way up through the hockey leagues. He suffered an injury to his right eye in 1956 that left him blind in that eye. Willie concealed how badly he had been hurt so he could continue to play hockey and made it onto a professional league team in Quebec. In January 1958, Willie was called up to the NHL’s Boston Bruins to replace an injured player, making him the first black player in the NHL. He was called up again in late 1960 and scored his first goal in January 1961. The NHL found out about his eye injury, but Willie played in other professional leagues for the rest of career, finally retiring in 1979. He started working with the NHL’s Diversity Task Force in 1996 and was inducted into the Hockey Hall of Fame in 2018. He’s also a member of the Order of Canada.

Meet Willie O’Ree is part of the “Scholastic Canada Biography” series which provides younger readers with biographies of important Canadians. The series is written by Elizabeth MacLeod and illustrated by Mike Deas. Each book is a picture book, but the illustrations are more like those of a comic book, complete with speech bubbles. This approach makes the presentation very lively and draws readers more into the story.

Meet Willie O’Ree does of good job of showing the obstacles Willie faced in his career, including racism, and how he dealt with or overcame those obstacles.

At the end of the book is a timeline of Willie’s life, along with some photos of him at different stages of his career. A short list of resources on black hockey players and black Canadians would be useful to ensure that readers can find more quality sources.

Meet Willie O’Ree is a great look at the life of Willie O’Ree for young readers, especially those looking at Canadian and hockey history.