Summer in the Land of Anne 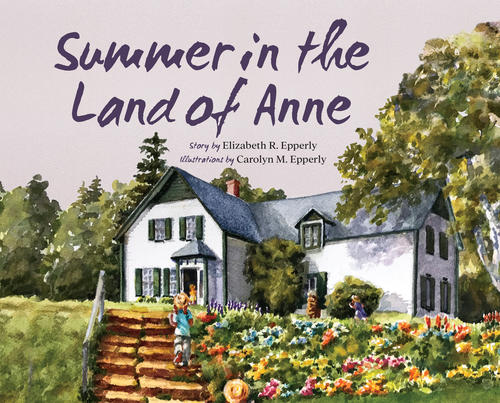 Summer in the Land of Anne

L.M. Montgomery’s Anne of Green Gables has been part of the Canadian literary canon almost since the first book appeared in print in 1908. Anne has found herself in translations, abridgments and adaptations, as well as stage, television and film versions of her story. This year, two different Maritime publishers offer storybook treatments using the orphan girl with the red braids as starting point.

Acorn Press of Charlottetown has produced Summer in the Land of Anne. Two young sisters are going on holiday from Virginia (I think – the map included at the beginning of their travels is a little less than helpful here) to Prince Edward Island. Willa is the older of the two, contemplative, a painter. Elspeth is the more active and mercurial younger sibling, and the stress of the trip causes some friction between them.

But once they reach the tourist site presented as Anne’s home, they both agree that they are experiencing something special. Their mother has prepared for their visit not only by reading Anne of Green Gables aloud to her daughters, but she has found out some background too:

Mama told them about the woman who wrote Anne of Green Gables. She explained that Lucy Maud Montgomery had visited this farmhouse and that it was now made to look like Green Gables from the book. Mama said people got confused and thought the house really was Anne’s house.

Inside the house, Elspeth felt confused too. It was so much like the book described. Anne’s dress with puffed sleeves hung on the closet door. They saw a broken slate and a very old carpet bag. Marilla’s black lace shawl was spread out on her bed, and Matthew’s tin of pipe tobacco sat on the bedside table of his downstairs bedroom.

Of course, the vacation would not be complete without attendance at performance of “Anne of Green Gables– the Musical” in Charlottetown. Elspeth takes inspiration from this as well as from a visit to the site of Montgomery’s real home, now nothing but an abandoned foundation.

Elspeth and Willa closed their eyes and they could hear the birds singing
and the wind ruffling the clover and grass. The air smelled sweet.

“I can see the house,” whispered Elspeth. “Can you, Willa?”

“Yes,” whispered Willa, touching her little sister’s hand. “I can.”

“Montgomery wrote about the things she loved best so she never
really lost them,” said Mama.

Elspeth took a deep breath. “She wrote so she could keep things?”

“Yes,” said Mama. “And because she wrote about the things and
the people she loved, we can love them and keep them too.”

Her mother’s description of the author’s path causes the little girl to wonder: could she mine her imagination and become a writer of stories too?

Artist Carolyn Epperley has captured the ambience and scale of Prince Edward Island perfectly. Although on a few pages the colours are muddy, the red soil fields in the opening spread are very true. The romantic soft-focus portrait of Montgomery is arresting.

The writer Elizabeth Epperly discovered the Anne books at a young age and, after becoming the first female president of the University of Prince Edward Island, founded the L.M. Montgomery Institute there.

The historical details of the text are impeccable, but I found the text somewhat plodding in its length. As a debut picture book, Summer in the Land of Anne is an earnest, if not always inspiring, offering. An additional purchase for larger collections.