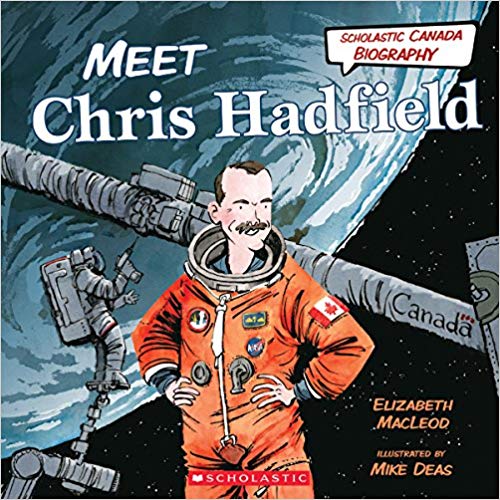 Chris couldn’t stop thinking about what he’d seen. It was amazing. He began dreaming of being an astronaut.

It seemed impossible. Canada didn’t even have a space program! But Chris wondered if someday it might be possible.

MacLeod and Deas have teamed up to write another book in the “Scholastic Canada Biography” series. Following Meet Viola Desmond (Vol. XXIV, No. 39, June 8, 2018) is a nonfiction picture book about Canadian astronaut Chris Hadfield. Before delving into his time in space, the 32 page biography contains highlights from Hadfield’s childhood (they lived on a farm in Milton, ON), his time with the Air Cadets, and the Canadian Armed Forces. Along the way, Hadfield’s worries about the future, and the challenging work he did to reach his goals are featured in realistic-styled cartoons.

Detailed artwork appears on every page and includes scenes from Earth and outer space. The speech bubbles that accompany them give further insight into the astronaut’s likely thoughts at the time, "Blech—I miss having a sink and a shower!"

There are a lot of Canadian references in the illustrations by Deas. In space, Hadfield wears red and white on most pages. The Canadian flag and the word Canada are visible on the Canadarm. The illustrations show F-18 fighters flying together from Hadfield’s test pilot days, and when the author writes about Hadfield’s time in space, the views of Earth from space include Canada. A few of the illustrations are inspired by YouTube videos Hadfield did about brushing his teeth and playing his guitar on the International Space Station.

After reading Meet Chris Hadfield, young readers will understand that becoming an astronaut takes dedication and teamwork. It is a hard journey, but one worth the effort. Back material consists of a timeline that spans the years 1959 through to 2016, and four labelled photographs that feature Hadfield at different stages of his life.