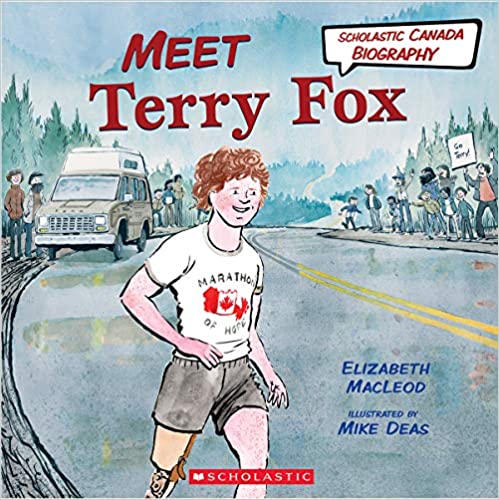 Terry (Terrance Stanley) Fox was born in 1958 and tragically died in 1981. The year 2020 marks the 40th anniversary of his Marathon of Hope which took him from the Atlantic Coast to Thunder Bay, Ontario. In that city, he was forced to stop after completing 5373 kilometres of the run across Canada he had wanted to accomplish when a recurring cough indicated that he had not beaten cancer. He died 10 months later, but his goal to battle cancer did not end with his life. The Marathon of Hope inspired the annual Terry Fox Runs that now take place across Canada and internationally and which have raised over $750,000 million for cancer research.

The sun was just rising, but Terry Fox had already been running
for an hour. Terry took two hops with his left leg, then a long
stride with his artificial leg. Step, step, stride. Step, step, stride.
Over and over. He clenched his jaw and grimaced in pain.
Up ahead, Terry could see the van where his friend Doug Alward
was waiting for him. Terry didn’t think about the thousands of
kilometres left to go – he just had to make it to the van so he could
gulp down some water.

Elizabeth MacLeod, a veteran writer of biographies for children, has made a contribution to the “Scholastic Canada Biography” series with this book. Her opening sentences plunge readers directly into a description of the tenacious effort that was Terry Fox’s Marathon of Hope. Images of Terry and his signature gait eventually came to be seen in every newspaper, on every television newscast, raising Fox to the status of Canadian hero.

But to set the stage, the book describes Terry’s early childhood and his love of sports, especially basketball. Although he was thought by some to be too small to excel at the game, his hard work led him to succeed.

The cruel diagnosis came shortly after he had begun student life at Simon Fraser University and where he had begun playing on the varsity basketball team. It was bone cancer, and after his right leg had been amputated, he was fitted for an artificial leg. While completing a round of chemotherapy, he had to learn to walk again. He found it difficult, but as with so many other undertakings in his young life, he was up for the challenge, painful though many days were. The exercise regimen he adopted in his rehabilitation fostered the idea for the Marathon of Hope.

Mike Deas has provided the spare and lightly-tinted line illustrations, and the book design makes it look in some ways like graphic novel. The speech balloons included make the text more interesting and accessible, and even provide a bit of humour.

Terry ran through strong winds, blazing sun and even a blizzard.

Many people still hadn’t heard about the Marathon of Hope.

Cars and trucks honked at him and sometimes even tried to get him off the road.

[speech balloon] “WHOA! That was close!”

It was fun to have more company.

With a recurrence of his cancer, Terry had to stop his run and return home for more treatment. The disease which had moved to his lungs ended his life at age 23. The story of the run is an amazing one, but even more outstanding is his legacy: the community runs which have attracted the participation of so many thousands, both adults and children; and the numerous sites bearing Terry’s name.

Schools, buildings, parks – even a mountain! – have been named after Terry.

Movies have been made about him. A monument stands outside Thunder

Bay, near where he had to stop running.

And there is an affecting bronze memorial to Terry in Vancouver, near where his life ended.
Although readers know there must have been many tears shed by Terry, his family members, and his supporters worldwide, the central message of the book is one of perseverance and hope. MacLeod presents a straightforward narrative that touches all the bases, from hospital stays to meetings with Canadians along the marathon route to Terry’s being awarded the Companion of the Order of Canada and the Lou Marsh Trophy for Canadian athlete of the year. The result is a book that can foster nothing but admiration among readers for a young person who became a symbol of what a strong spirit can accomplish.