Bringing Back the California Condor 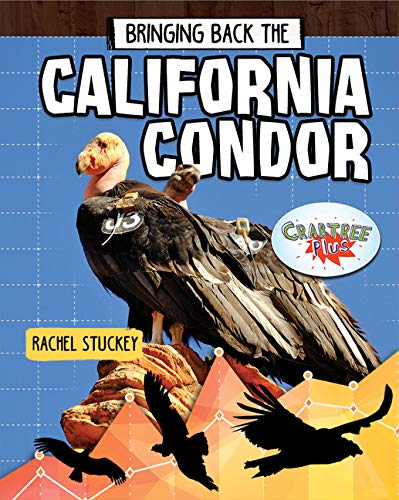 Bringing Back the California Condor

Condors have black feathers with white patches on the underside of their wings. They have bald heads with skin colors in shades of grey, pink, red, yellow or bright orange. They have long, powerful beaks, but unlike hawks and eagles, vultures do not hunt and kill food. Condors are scavengers that eat carrion, or the flesh of animals that have already died, such as deer, cattle, and sheep. Because they have no sense of smell, they use their good eyesight to find food. When they spot a carcass from the air, they circle and swoop down to start picking at it. Sometimes it looks as if condors are fighting over carrion, but often two birds will rock back and forth if the animal is big, using their combined body weight to tear the meet apart.

The addition of four new titles to Crabtree’s “Animals Back from the Brink” series brings the total number of books in the series to 14. Like most Crabtree series, these books are structured around two-page chapters which contain brief blocks of text accompanied by numerous full-colour captioned photographs. Each book begins with an introduction to the animal species that is risk and why it is in this state. The content of books’ second chapter, “Species at Risk”, is essentially common to all, and, in it, the authors introduce the International Union for the Conservation of Nature (IUCN) which, since 1964, “publishes the Red List of Threatened Species each year, which tells people how likely a plant or animal species is to become extinct.” These pages also identify the criteria the scientists use in determining where to place some 80,000 species of plants and animals on the Red list’s nine point scale that ranges from “Not Evaluated (N E) Not yet evaluated against the criteria” to “Extinct (EX) No living individuals survive.” The chapters which follow identify the specific threats to the survival of the book’s animal as well as the people and/or organizations that identified the species’ survival problem and how they went about rectifying the situation in order to bring the animal back from the brink of extinction. Three of the four books include two maps, one showing the endangered animal’s historic range and the other where the animal can presently be found. Because the island foxes’ past and present ranges are the same, Bringing Back the Island Fox only has a single map.

Conservation groups looking for “poster” animals for fundraising efforts would more likely select cute ones, like the giant panda, or majestic ones, such as the snow leopard, well before the carrion-eating California condor. In Bringing Back the California Condor, readers learn that this North American bird, which can live up to 60 years, once numbered in the thousands and had a range along the continent’s west coast that extended northward from California to British Columbia. However, in 1987, with only 22 birds left in California, it was listed as Extinct in the Wild (EW). Hunting and habitat destruction by humans contributed to the birds’ decline, but “[l]ead poisoning is the number one cause of death for California condors.” When a California condor feeds on the carcass of an animal killed by a lead bullet, it ingests lead particles and, over time, is poisoned by the lead accumulation. A more recent challenge is that of “microtrash”, things like bottle caps or drink can tabs, that adult condors ingest and then regurgitate to feed their young. The microtrash can then block the condor chicks’ digestive systems, causing them to starve to death. While captive breeding in zoos was the answer to increasing the bird’s numbers, the California condor presented particular challenges in that it takes the condor six years to reach breeding age and mates for life, with each pair only producing one chick every two years. Although California condors have been reintroduced into the wild, the book’s author does not provide a recent the International Union for the Conservation of Nature (IUCN) rating to indicate where the bird is currently placed on the Red List of Threatened Species.

All four books end with the same six closing sections: “What Does the Future Hold?” (Called “Looking to the Future” in the blue iguana book), “Saving Other Species”, “What Can You Do to Help?”, “Learning More” (which lists four books and four-six briefly annotated websites), a “Glossary” of words bolded in the text, and a one-page “Index”.

Bringing Back the California Condor would be a worthwhile addition to school and public libraries’ endangered species collections.