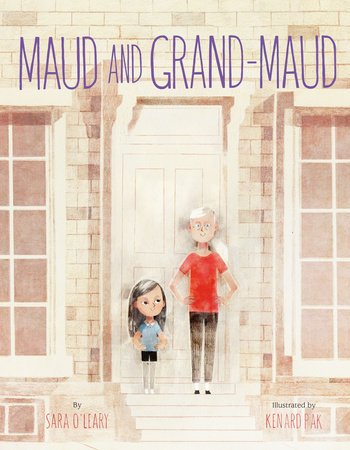 Grand-Maud has made Maud a nightgown for the nights she sleeps over. The nightgown goes all the way to the floor, and is made out of plaid flannel, and is softer than anything.

But what makes the nightgown special is that Grand-Maud has made herself one to match.

A young girl named Maud spends special weekends at her grandmother’s house. Affectionately referred to as Grand-Maud, Grand-Maud makes the weekends special for Maud by having breakfast for dinner while watching black and white movies in their nightgowns, giving Maud small gifts (including things from her own childhood), and, of course, talking about their lives and hopes for the future. The book ends with Maud’s explaining how some day she wants to have seven children of her own; Grand-Maud then says that Maud will someday have a granddaughter of her own. Kenard Pak’s muted coloured illustrations bring the story of Maud and her Grand-Maud’s thoughts to life.

I felt a connection with Maud and Grand-Maud, having very fond memories and similar experiences with my own grandmother (including the matching nightgowns). I also appreciated the subtle message that Grand-Maud had her own life before she was a mother or grandmother and did exciting things. Children often only see parents or grandparents as the caregivers they currently know rather than someone with rich life experiences of their own before they had children/grandchildren.

You never told me you rode on a real elephant,” said Maud.
“You never asked,” said Grand-Maud.

I was, however, a bit disappointed in the ending as I was hoping the book might end in a quirkier or unexpected way rather than having a common circular ending with Maud dreaming of becoming a Grand-Maud herself. Overall, O’Leary depicts a realistic loving relationship without being overly sentimental, and Maud and Grand-Maud is lovely book for children and adults alike.