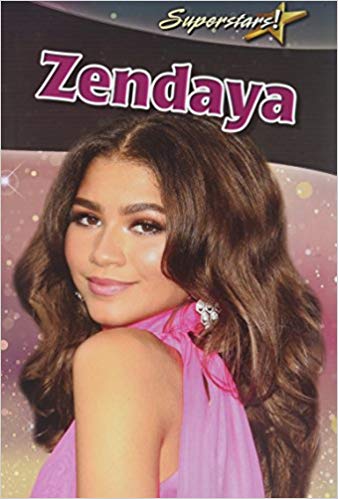 Leaving home was hard, but Zendaya says she was ecstatic to be living her dream. She had been hooked on the Disney Channel since she was five years old. Now she had a show of her own and was on the path to superstardom. And she didn’t have to go it alone. Zendaya soon found a new best friend- her costar Bella Thorne. The girls met at auditions for the show and had an instant connection. Shake it Up premiered on the Disney Channel on November 7, 2010. It was an instant hit, and the girls were overnight sensations.

With over forty nonfiction books in the “Superstars!” series, there is something for every middle school aged child who enjoys some form of pop culture, whether it’s music, movies, sports athletes, or even royalty. Zendaya, Shawn Mendes, and Harry Styles are three such books that readers of juvenile biographies can explore. Each book is 32 pages in length and divided into nine short chapters.

The first chapters introduce the reader to the star and explain what they do, where they are from (Shawn Mendes is Canadian), and give examples of their early successes. As the stars get more famous, the books delve into their bigger projects, friendships they made with their fans and other celebrities, and what they have planned in 2018. Shawn Mendes will be in a musical comedy film called Summer of Love. Zendaya is looking forward to producing and creating her own television shows and movies, and Harry Styles has been taking time to relax with family.

Each book contains coloured, labelled photographs on every page. They show the star of the book as a child, a teen, and as they are today. Sidebar facts appear in colourful star shapes in every chapter, and the bottom of most pages incorporates quotes (that are time and location stamped) from the celebrity. The words bolded in the body of the text are defined in the back of the book. Back material in the series includes a timeline of significant events, an extensive glossary and index, and a small bibliography of books and websites. There is a lot of emphasis on popularity in terms of fans, social media, salaries, and awards that have been won, but the books also show hard times each star has gone through and changes they have made in their lives.

The “Superstars!” series of books can encourage kids to read for pleasure, and the titles may appeal to reluctant readers because they are about successful, multitalented people readers likely will have heard of while at school, home, or with their friends.

Tanya Boudreau is a librarian at the Cold Lake Public Library in Cold Lake, Alberta.