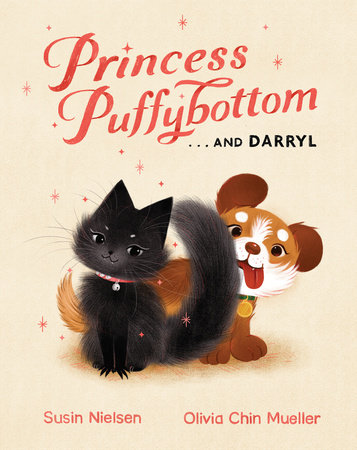 Princess Puffybottom had the perfect life.
Her subjects served her delicious meals.
(If they were late, she gave them a firm but gentle reminder)
…In return, Princess Puffybottom permitted some petting.
And she humored them once in a while.
Life was good.
Until the day Darryl arrived.

Princess Puffybottom is what some might consider spoiled. As a cat, she is already difficult to please, but once Darryl—an adorable little puppy—arrives on the scene, Princess Puffybottom decides she has had enough. She tries to sabotage Darryl’s carefree existence but is unsuccessful. And as time goes by, Princess Puffybottom begins to realize that Darryl isn’t as terrible as she thought. In fact, he might actually be her most attentive subject yet! But will it last?

Beyond the humorous prose and colorful illustrations—each delightful on their own—the interplay between text and image in this book is what really brings the story to life. Mueller’s adorable and bright images—Darryl’s round body and tan eyebrows; Princess Puffybottom’s fluffy tail, tiny paws, and little fangs—highlight the luxurious lifestyle that Princess Puffybottom is used to and also manage to create some dramatic irony at various points throughout the narrative. One particular moment is when the text notes Princess Puffybottom’s feelings of contentment—“At least her subjects wouldn’t be bringing home any more surprises”—while the illustration in this final spread reveals her owners bringing home a new baby.

While the humans in the book are rarely fully shown (faces are obscured or out of frame with a few exceptions) Princess Puffybottom’s subjects are revealed to be two women living together. The fact that this information is omitted from the text but shown in various spreads is a refreshing nod to sexual and racial diversity without making the book about sexuality or race.

Nielsen and Mueller have worked together to bring about a delightful twist on the rivalry and revenge trope, giving a nod to same-sex couples within the tale of drama between household pets. Parents and children will be able to see themselves within the antics of Princess Puffybottom and Darryl. If you need a good laugh and a fun read-aloud, then Princess Puffybottom...and Darryl would make a fantastic go-to!

Rob Bittner has a PhD in Gender, Sexuality, and Women’s Studies (SFU) and is also a graduate of the MA in Children’s Literature program at The University of British Columbia in Vancouver, BC. He loves reading a wide range of literature, but particularly stories with diverse depictions of gender and sexuality.