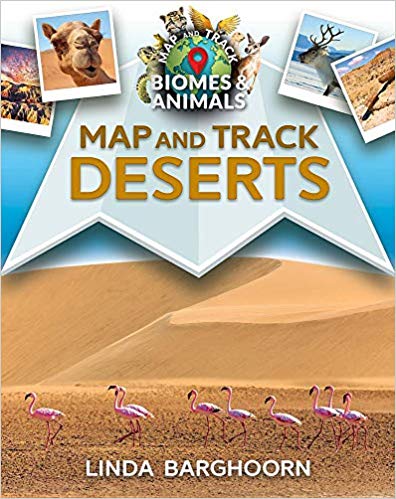 Zebras are grazing animals, always on the move searching for fresh, tender grass to eat. They follow the Kalahari rains in search of fresh grass. However, during the dry season, they must often eat dry, rough grass, leaves, and even tree bark. They often share their habitat with wildebeests. The zebras eat the long blades of grass that they prefer. This makes it easy for wildebeests to reach the shorter blades of grass that they like - two meals for the price of one!

The six titles in the “Map and Track Biomes and Animals” series feature biomes around the world and the animals that live there. Each title begins with an introduction to the specific biome and its characteristics, followed by a colour-coded map which indicates where the biomes are located. The remainder of the 13 chapters highlights those areas and provides information about the flora and fauna. Climate, soil type and available water determine which plants and animals live in a particular biome (and, in fact, some can survive in several). Topics include animals’ life cycles, food, physical and behavioural adaptations, migration patterns, as well as environmental threats to their habitats and protection programs which are in place to curb habitat loss. “Map and Track” sections feature various animals and their home ranges while “Stop and Spot” text circles focus on endangered or threatened animals. A mapping/tracking activity at the back of each book invites readers to research an endangered animal and create a map which shows the animal’s home range, although it is doubtful that many readers would attempt this. The text is enhanced by plenty of colour photographs, maps and insets. A minor flaw, however, is that the first map in each book is too small. This is especially evident when biomes are located in several areas around the world or when the biome is very small. In the latter case, readers looking at a mere speck on the world map will really have no idea of which country is home to a particular biome.

The strength of the series is that it introduces readers to some very unusual animals (and, to a lesser degree, some unique plants). Some examples include the monito del monte (a small marsupial which lives in the South American rain forest), a capercaillie (a boreal forest grouse) and an argalis (a wild sheep of the mountain grasslands). In addition, the series raises awareness about environmental issues and the disappearance of land and animals and discusses invaders, such as non-native plants and animals, which have upset the balance of nature in various ecosystems. For instance, the water hyacinth was first introduced as a decorative water plant, but it eventually spread out of control and clogged waterways, thereby killing native plants and starving fish of oxygen.

A table of contents, a glossary, an index and a list of books and web sites for further study are provided.

Deserts are found on every continent and cover almost a third of the Earth’s land surface. They can be categorized into four main types: subtropical, coastal, semiarid and polar. Map and Track Deserts features, among others, the Sahara, Kalahari, Gobi, Mohave, and Arctic and Antarctic polar deserts. The Atacama, a coastal desert in Chile, has had no rain since climate records began in 1850. Bilbies, snow leopards, elephants, pumas, desert tortoises and penguins are the animals showcased in the “Stop and Spot” circles.

Generally, “Map and Track Biomes and Animals” is a good series which provides a basic overview of various biomes and their animal dwellers, but those readers who require more in-depth information will have to look elsewhere.