Building Tens with My Friends 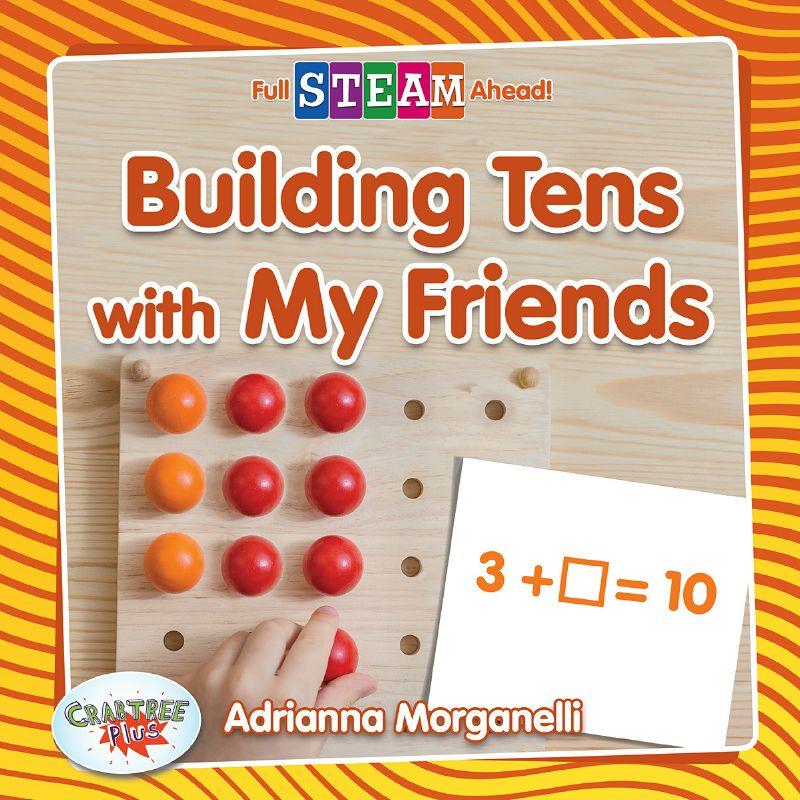 Building Tens with My Friends

Oscar counts ten beads.
Ten is a bundle of ten ones.

Bundles of ten ones are called tens.

Anika thinks it will take too long to count
all of the beads. “Let’s count the rest of the
beads in tens,’ she says.

There are six bundles of ten beads. That makes 60 beads.

Crabtree’s new “Full STEAM Ahead!” series consists of 20 titles that are divided into five groups of four: “Math Matters”, “Science Starters”, “Technology Time”, Engineering Everywhere” and “Arts in Action”. Crabtree explains that “Full STEAM Ahead is a literacy series that helps readers build vocabulary, fluency, and comprehension while learning about big ideas in STEAM subjects.”

The four books in the “Math Matters” subset of the “Full STEAM Ahead!” series are Subtraction in Action, Skip Counting My Way to School, Building Tens with My Friends and Building with Shapes

For example, the learning objectives for Subtraction in Action consist of:

Readers will:
* Describe subtraction as taking one number away from another, and identify subtraction clue words.
* Use visuals and clue words to complete subtraction problems.
* Identify the main ideas of the book and restate ideas in their own words.

The text then identifies the “High-frequency words (grade one)” that appear in the book as well as words described as “Academic vocabulary”. For example, in the case of Skip Counting My Way to School the former words are “by, can, her, in, one, she, the, to, we” while the latter words are “backward, fifth, forward, pattern, second, skip counting, tenth”.

The remainder of the half-page consists of suggested “Before, During, and After Reading Prompts” that a teacher or parent could employ if using the book in an instructional setting.

As is common in Crabtree series, words that are highlighted in the text are later defined in a “Words to Know” page. Assistance for educators continues on the book’s closing page which provides teachers with detailed information on conducting a STEAM activity that will help readers extend the ideas in the book and build their skills in some combination of the STEAM fields. In addition, teachers can download any worksheets needed to complete the suggested STEAM activity via www.crabtreebooks.com/resources/printables

In Building Tens with my Friends, readers are to identify ways to add ones to make a bundle of ten and to count objects in groups of ten and in groups of tens and ones. Each “word problem” is visually supported via full-colour photos of common objects. The closing STEAM activity calls for the book’s users to create a structure that, in addition to being a meter tall, “must be made of one bundle of ten...” and “the bundle of ten needs to be made of three different types of objects.”

Unlike some of the other subsets in the “Full STEAM Ahead!” series, the books in the “Math Matters” quartet do not present a cohesive whole, and consequently, according to their needs, teachers/parents might wish to purchase individual titles as opposed to acquiring all four books.