Freddy and the Blue Jays 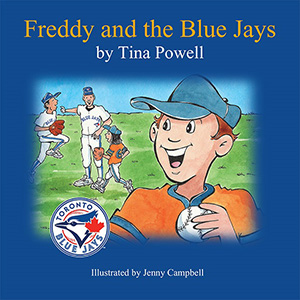 Freddy and the Blue Jays

At the baseball diamond, Coach Carla had a big surprise. “Today we’re going to have a special practice,” she announced. “We’re going to practice with the Toronto Blue Jays!”

Freddy watched in amazement as the Toronto Blue Jays ran onto the field.

Although Freddy was excited about meeting his all-time favourite baseball team, he was also a little confused. “The Toronto Blue Jays are the best team ever. Why do they need to practice?”

Freddy loves baseball, and he especially loves the Toronto Blue Jays, his “all-time favourite baseball team”. The only problem is that he hates to practice because he’s believes he’s so good that he doesn’t need to practice.

One day, Coach Carla has a special surprise for the team – the Toronto Blue Jays are coming to train with them. But as practice begins, Freddy declares, “You go ahead, I’m already a good baseball player.” While everyone is practicing how to swing the bat, run bases, and catch pop flies, Freddy prefers to stand on the sidelines. However, when the two teams face off in a friendly match, Freddy realizes that maybe he should have been a team player and practiced all along.

Written in clear, concise language, Freddy and the Blue Jays is an enjoyable read that teaches children the value of team work and dedication. Accompanied by colourful illustrations that enhance the action of the story, this picture book is perfect for young baseball fans the world over.

Teresa Iaizzo is a librarian with the Toronto Public Library.