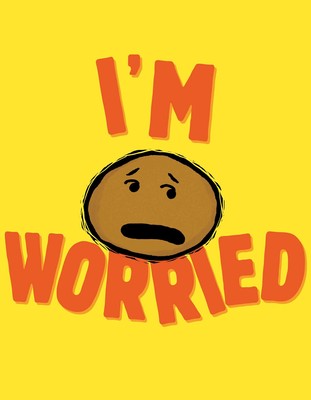 What are you worried about?

Why are you worried about the future?

Because what if something BAD happens?

A trio of friends, (a girl, a potato, a flamingo) is playing basketball one day when the potato confides his insecurities. Like many small children, he worries about things he can’t control. He cites examples of accidents where he’s been hurt and says the future is making him anxious! He transfers his anxiousness to Flamingo who, until that point, had been blithely holding up the basketball net.

The girl tries to calm them both and points out that she’s had accidents befall her, too, but that most of the time, things turn out all right. Potato and Flamingo are not convinced, though. They wrap themselves in bubble wrap to shield themselves from the world’s dangers.

But bubble wrap is confining and not much fun. The two scaredy-cats unwind and decide to follow their friend’s advice: Enjoy the now. They learn to have fun in the moment again.

I’m Worried follows I’m Sad and I’m Bored in Michael Ian Black’s series about children’s emotions and is his ninth children’s book. The prolific American actor, comedian and writer has also hosted and starred in television shows and is an avid poker player. He’s been quoted as saying he wanted to talk about emotions adults often dismiss in children, with the assumption the children will “get over” whatever is bothering them.

This story addresses the issue of worry in a simple way (small crisis, then they follow the girl’s advice), suitable mostly to the level of understanding of pre-school children. Using a potato and a flamingo as characters adds a comic touch to the story which will lighten the topic for young ones.

Toronto writer and illustrator Ruth Ohi adds another title to her 60+ list with I’m Worried. Ohi uses bright colours (except for that brown potato) on a bright white background. She clearly indicates the characters’ worries with slightly shaky edges around dark outlines. The little girl bends and twists as she flies up to the basket, demonstrating her skill at basketball and her comfort with life’s ups and downs. Different sizes and colours of text convey the characters’ feelings, too.

I’m Worried can be useful for a caregiver or teacher to talk about a child’s concerns about the unknown, especially if an unexpected event has taken place. The illustrations add a light touch to a serious topic which will comfort a worried child.

Harriet Zaidman is a children’s and freelance writer in Winnipeg, Manitoba. Her novel, City on Strike is set in the 1919 Winnipeg General Strike.