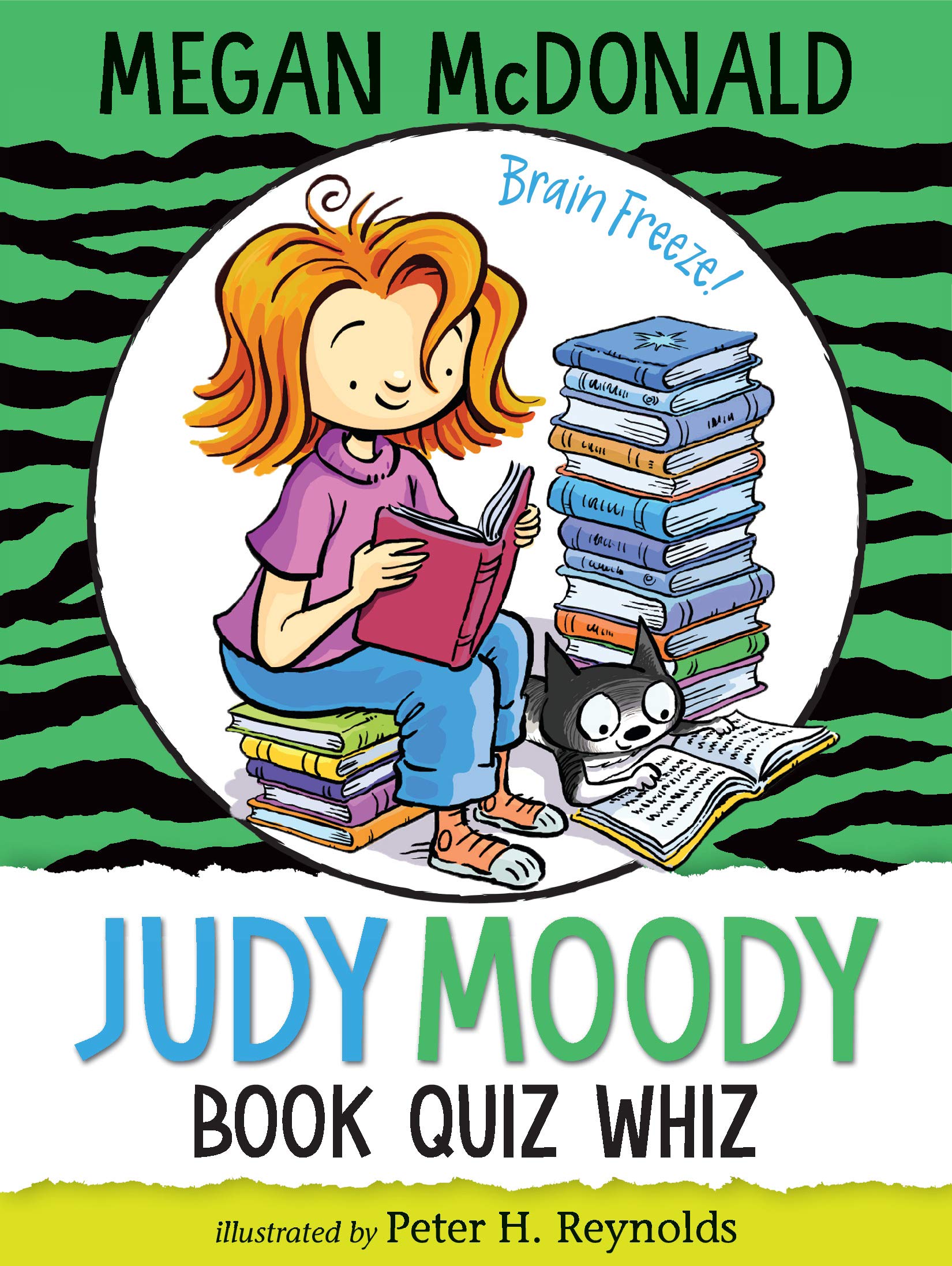 "But it's not the Tray Game," said Jessica. "It's the Jessica Finch Future Teacher Reading Game. I invented it."

"Everything on the tray has a connection to one of the books we had to read for the Book Quiz Blowout. Each one is a clue. I'll hold up an object. You be the detectives and tell me what book it's connected to."

Jessica reached under the towel and pulled out the first object.

"Catwings! Judy and Stink called out at the exact same time.

As anyone who has read other Judy Moody books will have realized, Judy is Competitive, with a capital 64-point C. Whether she is trying to have the best science project or the most distinguished family tree, Judy is in there to WIN -- even if she is the only one who regards the situation as being a contest at all! However, this time, there is a real competition with a real prize: the Book Quiz Wizard Cup (which is not only large and impressive, but it flashes all the colours of the rainbow when turned on) plus money for books for the school library! But this is a team effort. Judy and her brother Stink, plus three others from their school, are pitting their memories and wits against a team from Braintree Academy, a team which, by a quirk of birthday timing, includes someone not only from Grade 4 but someone who has read Harry Potter!

But Judy and her team are determined. They quiz each other endlessly on the minutiae of the books on the Book Quiz Master Lists One and Two; they invent games to test their powers of association; they devise schemes to help themselves remember authors and titles. Mostly, though, they read. They read in bed, on the bus, in the Club tent, at karate class, anywhere and everywhere -- except at the dinner table, where the parental foot is put down and books must be shelved. (My pun, not Judy's father's!)

Each of them develops a way of remembering details -- Stink, for example, writes them down on sticky notes and puts them on his Super Power cape, but then Stink is seized with "Brain Freeze" when he is told he can't wear his cape to the actual quiz! Judy attempts to speed read. When the great day comes, they are all primed and ready, and the Virginia Dare Bookworms face off against the Braintree Academy's Fake-Mustache Defenders at the Starlight Bowling Lanes. The two teams race neck and neck to the finish line of 150 points and arrive simultaneously, but in the Bonus Round, when Judy is chosen to represent the Bookworms, she gets her question right (she was lucky, since she knew the Pippi Longstocking books practically by heart) and the Harry Potter expert got the number of staircases at Hogwarts wrong! Hurrah and on to mini tacos, $500 to each school for books, and an evening of bowling.

The best of this book is that the kids love to read! Sure, it is a competition, and the cup is really cool, but it is the books that are the most important things. Also important though is the teamwork required. Jessica Finch, usually the despised rival, is here shown as a helpful and useful member of the Bookworms. (I thought her version of Kim's game was inspired.) I don't really go for reading as a competitive sport, but it does seem as if this worked as a way to challenge these good readers to do more and to read a greater variety of types of books in spite of their all having their specially favourite areas. Jessica, for example, read all the books about pigs because she likes pigs. As an added bonus, Judy Moody, Book Whiz Quiz includes a list of all the books alluded to or hinted at or quoted from so that interested readers can expand their own horizons. In fact, this book has a bit of everything: excitement, fun, and BOOKS. What more could one ask?

Mary Thomas is a retired library person in Winnipeg, Manitoba, who has, to date, not been very keen on Judy Moody, but she has been converted, at least temporarily.