Recess in the Dark: The Poems from the Far North 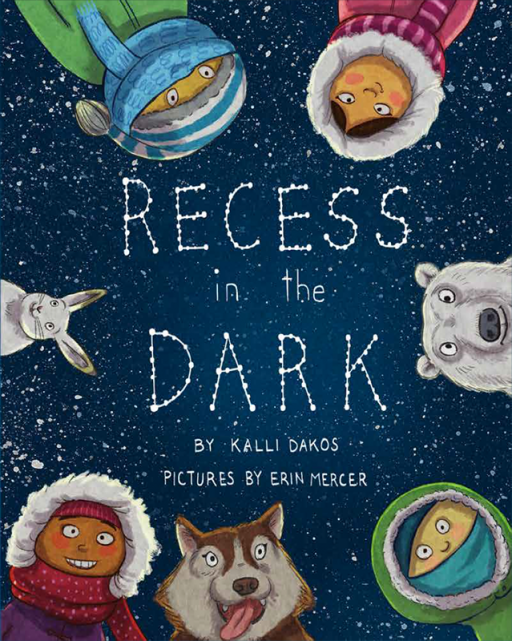 Recess in the Dark: The Poems from the Far North

An intriguing title and enticing cover art will draw young readers into this amusing and informative collection of 25 poems (with the back cover text providing a bonus of two additional poems, one being the excerpt above). A concluding “About the Authors” note introduces the poet, Kalli Dakos, and explains how Recess in the Dark: Poems from the Far North came to be:

A former teacher and reading specialist, Dakos taught at Sir Alexander Mackenzie School in Inuvik, Northwest Territories, Canada. She has returned on author visits to encourage the children to write about their fascinating lives above the Arctic Circle. This book was inspired on one of those trips, when “recess in the dark” was chosen as a favourite writing topic.

As part of her “Dedication”, Dakos says the book is “For the children who live in the land where Recess in the Dark is a part of their lives, and for those who will have the opportunity to explore this amazing experience through these poems.” As the book’s contents reveal, what children in the “Far North” encounter during recess is quite unlike that experienced by their peers in more southern climes. Readers closer to the 49th parallel can only imagine what it would be like to go to school in the dark, have recess outside in the dark, and then go home in the dark, never once seeing the sun, but that is what children in Inuvik experience for some 30 consecutive days every year when the sun never appears.

The collection begins with the poem, “A Warning for Wimpy Kids”, that underlines recess in the Far North is “colder than a freezer, wild bleak, and dark” and that “Recess in the Dark is for the strong who live up here.” The contents of the next 23 poems provide insights into various aspects of playing outside at recess when “The Sun Won’t Shine”. Imagine seeing the stars or the Northern Lights at recess time. Normal playground structures are supplemented by igloos and ice slides, and common games, like Hide and Seek, take on new dimensions when played in the dark. Five poems, “Under the Stars”, “Lucy and Her Frozen Belly Button”, “Gary’s Underwear”, “Frozen Toes” and “My Rabbit Mittens”, address the need to dress appropriately for the North’s extreme cold. But the 24 hour darkness must eventually end, and the last two poems, “Gary’s Polar Snow Bear” and “We Have Light”, acknowledge the welcome return of some sunlight.

Most of the poems are given their own two-page spread. In addition to the poem’s text, Dakos adds a sentence or two at the bottom of the page with that text providing some factual information connected to the poem’s content, For example, below “A Raven”, readers are informed that: “Most birds fly to warmer climates in the winter, but the raven laughs in the face of the cold winds as if to say, ‘You can’t make me leave.’” Similarly, in “Dog Team”, when the children create their own dog team from snow, Dakos adds the information: “Dog teams are still used in the North because they are safer than snowmobiles. A snowmobile can break down, but the dogs are reliable.”

Erin Mercer’s lively artwork, digital paintings created by using pencil, pastel and oil brush packs, adds significantly to the collection’s impact. She effectively renders scenes in the colours one associates with winter’s darkness - the blues and purples of the nighttime snow, the black night sky punctuated by pinpricks of stars’ distant light or lit up by the Northern Lights’ dancing greens, yellows and reds, or the full moon’s almost unnatural reflected brightness. The coloured winter clothing of Mercer’s muffled cartoon characters allows them to stand out in the daytime darkness.

Recess in the Dark: Poems from the Far North would be a most worthwhile addition to school and public libraries.

Dave Jenkinson, CM’s editor, lives in Winnipeg, Manitoba. He once spent a week in Inuvik in August. Should he ever write a book of poetry about this experience, it would have to be called “Sleeping in the Light” as the sun never really set during his visit.